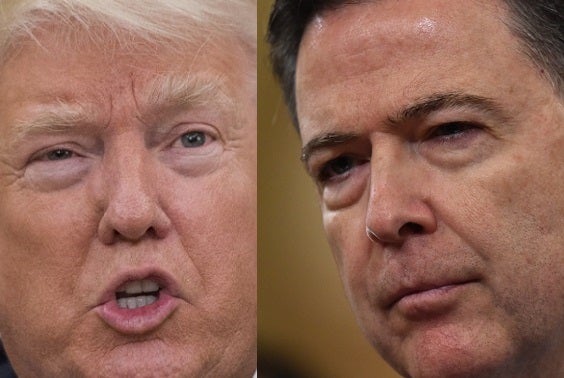 But more evidence is needed to prove that the president attempted to stymie the investigation into Russian meddling in the 2016 election, which has several Trump campaign aides in its crosshairs.

With stronger evidence, Trump could face the same sort of criminal allegations that forced president Richard Nixon to resign in 1973, and saw Bill Clinton impeached by the House of Representatives but survive a Senate trial in 1998-99.

Legal analysts assume that former FBI director Robert Mueller, the independent special counsel in charge of the Russia probe, has now branched out to see whether Trump has interfered in any illegal way.

What Comey said about his private February meeting with Trump, and Trump’s firing of him on May 9, “gives good reason for the special prosecutor to be pretty aggressive.”

On Friday an angry Trump said Comey “lied” and that he was “100 percent” prepared to be interviewed by Mueller in any probe.

Comey: Trump ‘directed’ him to ease up

The first challenge is the word “hope.” Comey said that in their February 14 meeting Trump expressed “hope” that the FBI would drop its probe into former national security adviser Michael Flynn over Flynn’s contacts with Russian officials.

Comey said he took that as a presidential command. “I mean, this is the president of the United States, with me alone,” Comey said, noting Trump had sent all his staff out of the room before the discussion.

“When it comes from the president, I took it as a direction.” Asked if he saw it as an “order,” Comey replied “yes.”

Comey said he believed he was fired because of the Russia probe, which has moved steadily closer to the White House, with investigators examining Trump’s son-in-law and senior adviser Jared Kushner.

“I take the president at his word, that I was fired because of the Russia investigation,” he said, referring to a statement by Trump in an NBC interview. “Something about the way I was conducting it, the president felt, created pressure on him that he wanted to relieve.”

Given Comey’s reputation as a methodical, ultra-cautious investigator, the testimony was damning, said a Washington lawyer who served in a top position in a prior administration.

“It’s going to get investigated. If I’m Trump’s lawyer, I now know that the obstruction file is open in the special counsel’s office,” he said, asking not to be identified.

“The question is going to be whether they find evidence of intent.”

That could come from any of several corners. Mueller will likely seek to determine whether anyone on the White House staff discussed what Trump was going to say to, or do with, Comey.

Also crucial will be whether Trump recorded the meetings, as he seemed to suggest in a tweet after firing Comey.

In addition, news media have reported that Trump asked other officials to intervene.

A day before Comey’s testimony, two top spy chiefs, National Security Agency Director Mike Rogers and Dan Coats, director of national intelligence, both refused to answer when Intelligence Committee members inquired whether Trump had ever “asked” them to help ease the probe. Both men, though, said they never “felt pressured” to do so.

But how they felt matters less than if they were asked, the former administration lawyer said. “That would be additional evidence of intent.”

Only a ‘political sin’?

Celebrated criminal defense lawyer Alan Dershowitz has argued in a lengthy Twitter commentary that Trump was at worst guilty of “political sins”; he said there is “no plausible case” for obstruction charges.

“You can’t have obstruction of justice when the president didn’t commit a crime,” he wrote. “The president has the authority to tell the director of the FBI to stop an investigation.”

But former Republican congressman Bob Inglis summarized the gravity of the situation when he recalled his own role on the House Judiciary Committee that voted to impeach Bill Clinton in 1998 for obstruction and perjury.

Clinton was tried in the Senate “for matters less serious than the ones before us now,” Inglis said. CBB/rga