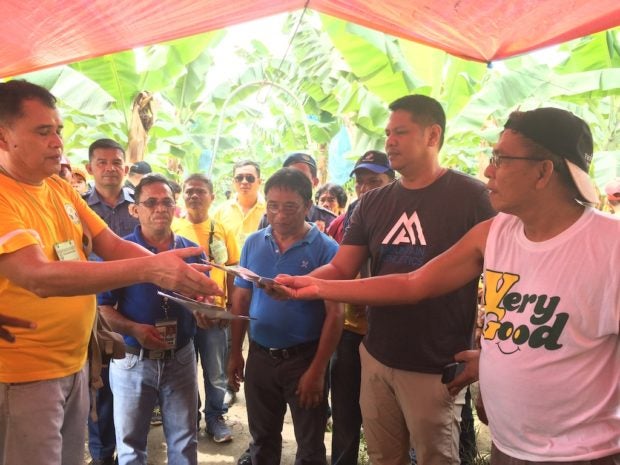 Farmers belonging to the Compostela Plantation Inc.-Banana Producers Cooperative receive official documents from the Department of Agrarian Reform recognizing them as the rightful agrarian reform beneficiaries in a banana farm in Compostela town, Compostela Valley in May 2017. ( Photo is from the official website of DAR at http://www.dar.gov.ph/national news/2939-dar-installs-rightful-agrarian-beneficiaries-of-a-davao-banana-farm)

MANILA — Not all “occupation” movements are made equal.

The Department of Agrarian Reform (DAR) ended up having to lead moves to evict “squatters”  in government-awarded farmlands in Compostela Valley  to make way for actual identified agrarian reform beneficiaries (ARB), under the Comprehensive Agrarian Reform Program.

Last May 30, the DAR announced the installation of 160 farmers under the Compostela Plantation Inc.-Banana Producers Cooperative (CPI-BPC) in a 23-hectare banana farm formerly owned by Prosperador Regaña and the Development Bank of the Philippines.  The installation of rightful farm beneficiaries and the eviction of illegal occupants happened in Compostela town, Compostela Valley.

The ARBs, who were issued their Certificates of Land Ownership Award (CLOA) in October 2016 and last May 23, had been having trouble occupying the land, after another group called the Compostela People Farmers Workers Association, led by a Prince Juan Tallano, barricaded the farmlands, claiming they were the rightful owners and agrarian reform beneficiaries.

A National Bureau of Investigation (NBI) probe requested by the DAR, however, found Tallano’s group had no rightful claim. “Based on the investigation conducted by the NBI, the land titles of Tallanos’ group are fakes as verified by the Register of Deeds. We also found out that their leader, Tallano, is included in the list of professional squatters and a member of a squatting syndicate,” said local DAR
Sheriff Adelaido Caminade.

A joint force of policemen and soldiers deployed in the area helped in the eviction of Tallano’s group.

Meanwhile, another protesting group composed of 32 farmworkers led by Toto Magdayao, who also claimed to be rightful beneficiaries having tilled the land since 1994, voluntarily vacated the area after Vice Governor Manuel Zamore assured them of legal assistance in filing a petition for inclusion as ARBs.

To ensure the bonafide ARBs’ safety, DAR Provincial Agrarian Reform Program Officer Melchor B. Jamora requested the military to provide the farmers 24-hour security for the next 10 days.  SFM 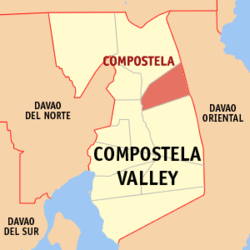