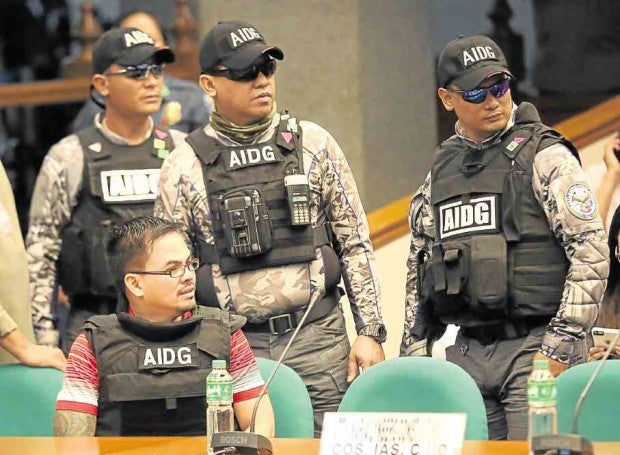 Kerwin Espinosa under heavy guard during his appearance at the Senate on Dec. 5 last year —INQUIRER file photo/MARIANNE BERMUDEZ

TACLOBAN CITY, Leyte—The camp of alleged drug kingpin Kerwin Espinosa was shocked by the decision of  the Department of Justice to downgrade the case against operatives of the Criminal Investigation and Detection Group in Eastern Visayas for killing Espinosa’s father, Albuera Mayor Rolando Espinosa Sr.

“We were not only shocked but very, very shocked. I have not spoken to Kerwin yet though I have already talked with his siblings in Albuera who expressed their fear,” lawyer Leilani Villarino said in a phone interview.

She said they will file a motion, asking the DOJ to reconsider its decision to downgrade from murder to homicide the case against CIDG officers led by Supt. Marvin Marcos for killing the mayor and a fellow inmate inside the detention cell at sub-provincial jail in Baybay town, Leyte.

Villarino said they had not yet received the official copy of the DOJ resolution although the Provincial Prosecutor’s Office gave them a photocopy.

She stressed that there were evidence to pin Marcos and his men on the murder of Espinosa and fellow inmate Raul Yap inside their detention cells in November 2016.

The CIDG officers were supposed to be arraigned before Judge Carlos Arguelles of the Regional Trial Court Branch 14 in Baybay on Wednesday.

But the arraignment was postponed after the panel of prosecutors filed an amended information for homicide against the police officers.

The amended information stemmed from the resolution from the DOJ dated May 28 that downgraded the case to homicide due to the absence of premeditation.

The DOJ resolution said it was not excessive but “necessary force” to implement a search warrant on the jail facility.

The gunpowder burns on Yap and Espinosa only showed that they had shot it out with the police during the raid.

Arguelles asked both the prosecution and the defense to present their comment on the resolution on June 14.