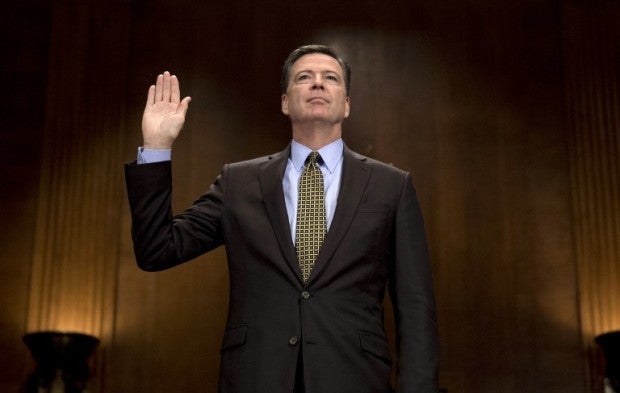 This file photo taken on May 3, 2017 shows
FBI Director James Comey sworn in prior to testifying before the Senate Judiciary Committee on Capitol Hill in Washington, DC.
US President Donald Trump asked former FBI director Comey to drop an investigation of his national security advisor Michael Flynn, the New York Times reported on May 16, 2017. In an explosive new report that was immediately denied by the Trump administration, the Times said Comey met the president in the White House on February 14, later summing up their discussion of Flynn in a memo. / AFP PHOTO / JIM WATSON

Detailing one-on-one talks with a sitting president, which under normal circumstances would never see the light of day, Comey said he took painstaking notes for fear Trump might “lie” about the extraordinary encounters.

That account painted a devastating picture of an untrustworthy president, who at best unknowingly shred the norms of office by pressing him on the probe into Russian election meddling, and at worst may have criminally obstructed justice.

During one White House dinner, Comey recalled that the president asked him for “loyalty” and to lay off his former national security advisor Mike Flynn—who is under criminal investigation over his Russia ties—imploring Comey to “let this go.”

Comey indicated that it was now up to a high-powered special prosecutor to determine whether that behavior, and his own sacking, constituted an obstruction of justice, a potentially impeachable offense.

Easing months of speculation, Comey did confirm that Trump was not personally the subject of a counterterror or criminal probe when he left the FBI last month.

The White House and Trump’s lawyers expressed vindication at some parts of Comey’s testimony and lashed out at others.

“I can definitely say the president is not a liar and frankly am insulted by that question,” said White House spokeswoman Sarah Huckabee Sanders.

The president, said lawyer Marc Kasowitz, “never told Mr. Comey ‘I need loyalty, I expect loyalty’ in form or substance,” rejecting a key allegation made by the sacked FBI director.

Trump avoided directly responding to the explosive accusations, defiantly telling supporters at a religious event in the capital: “We are going to fight and win.”

After solemnly raising his right hand and vowing to tell the whole truth, a visibly aggrieved Comey kicked-off his testimony with a bid to set the record straight about the state of the bureau he led until he was sacked last month.

“Although the law requires no reason at all to fire an FBI director, the administration then chose to defame me and more importantly the FBI by saying that the organization was in disarray, that it was poorly led, that the work force had lost confidence in its leader,” he charged.

“Those were lies plain and simple,” Comey said, firing a shot of tension through hearing room 216 of the Senate’s Hart building, which stood silent except for the shutter clicks of a phalanx of photographers capturing the moment of pure political theater.

Lawmakers started the hearing with a call for unity of purpose but the pretense of bipartisanship soon fell away.

Democrats are intent on determining whether Trump’s actions amounted to obstruction of justice, while Republicans have zeroed in on Comey’s admission he assured the president he was not personally an FBI investigation target.

Trump abruptly fired Comey as director of the Federal Bureau of Investigation on May 9, admitting later that the Russia probe was on his mind at the time.

In his written statement, Comey described his mounting discomfort in the weeks leading up to his dismissal as Trump pulled him aside in person and phoned to press him on the probe into his campaign associates and possible collusion with a Russian effort to tilt the 2016 vote in the Republican’s favor.

At a private White House dinner on January 27, just days after the billionaire took office, Comey said Trump appeared to want to “create some sort of patronage relationship” with him.

“The president said, ‘I need loyalty, I expect loyalty.’ I didn’t move, speak, or change my facial expression in any way during the awkward silence that followed,” Comey said.

In an Oval Office tete-a-tete the following month Comey said Trump pressed him to drop the FBI investigation into Flynn, who had been fired for lying to the vice president about his unreported conversations with the Russian ambassador.

And he described trying to insulate himself and the FBI from political pressure, as the president complained about the Russian probe and labeled it “fake news.”

Harvard law School professor Mark Tushnet said onlookers should keep in mind that Comey knows much more than he can say.

“He’s saying that when he looks at all the evidence that he knows, that he draws the conclusion that the president was trying to pull him off the investigation of Flynn.”

“It’s a pretty powerful statement that an investigator with his background, (says) when I look at this investigation, this is what I conclude. So his statement is a big deal.”

Networks and cable news stations provided blanket coverage of the testimony, and hundreds of people turned out at Washington bars for watch parties, glued to live TV broadcasts of the hearing.

‘There’s been so much media hype, it’s good to actually hear this from the source,’ said Sadie Cornelius, 33. “It’s good to hear the facts.” JPV