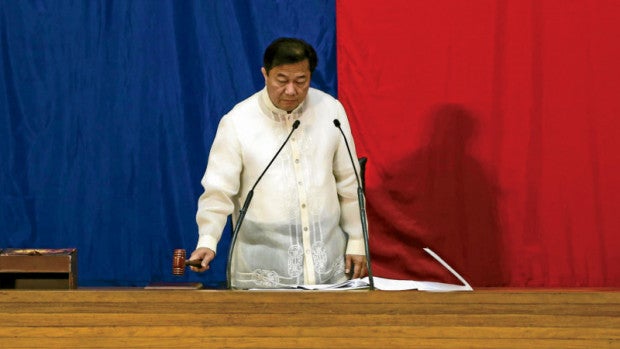 House Speaker Pantaleon Alvarez on Thursday said Congress may soon be the one to issue licenses to casinos and other franchises following the attack by a lone gunman at Resorts World Manila whose license Alvarez soon wants revoked.

In an interview with reporters, Alvarez said Congress should have the mandate to issue licenses following a lone gunman’s attack at Resorts World Manila, where he fired shots and burned casino tables and chairs that resulted in the suffocation of most of the fatalities.

(That’s the power of Congress. All franchises should originate from Congress. Now it was delegated by Congress. I think Congress needs to take that back because of all these problems happening, including what happened in Resorts World.)

Alvarez made this suggestion to have Congress control the issuances of licenses and franchise during Wednesday’s lower House inquiry into the Resorts World attack, carried out by a lone gunman that resulted in the deaths of 37 casino goers and employees. Alvarez has described the attack as an act of terror.

During the House inquiry on the attack, Alvarez said that the license of Resorts World Manila should have been revoked due to the casino management’s security lapses, which caused the gunman to barge in the premises.

Alvarez said the House leadership would support a bill that would amend the charter of the Philippine Amusement and Gaming Corp. (Pagcor) renaming it as the Philippines Games and Amusement Authority, clipping the powers of the state-run gaming firm to issue licenses to casinos and reducing it to a mere regulatory body.

READ: Alvarez wants casinos to get legislative franchises instead of Pagcor licenses

Alvarez said it should be Congress through its legislative franchise committee which should be the one to issue licenses and franchises, removing such powers from Pagcor, and even from Philippine Charity Sweepstakes Office (PCSO) and the Land Transportation Franchising and Regulatory Board (LTFRB).

According to its charter, the PCSO is mandated to hold and conduct sweepstakes races, lotteries, and other similar activities to raise funds for charity works. Alvarez said the PCSO would be limited to charity works, instead of being the operator of lottos and sweepstakes.

Meanwhile, the LTFRB is the franchising and regulatory board for public land transportation services.

(All franchises would come from Congress. Even the PCSO, they will no longer be allowed to operate lotto and issue licenses to small town lottery. All of these should go to Congress. The PCSO will be purely a recipient so it could focus on its mandate on charity.)

Alvarez even said the lower House should also control the granting of permits to mining corporations.

During the inquiry on the Resorts World Manila attack, Ilocos Norte Rep. Rudy Fariñas, the majority leader, then said he had been instructed by Alvarez to draft a bill to amend Republic Act 9487, passed by Congress in 2007 that extended the corporate life of the state-run gaming firm by 25 years and amended the Pagcor chapter or Presidential Decree 1869.

The Presidential Decree gave Pagcor the power to regulate, as well as issue licenses and franchises to all games of chance, games of cards and games of numbers, particularly casino gaming in the country.

The Republic Act 9487 passed by Congress in 2007 proposed the following amendments to the Pagcor charter—Pagcor can enter into agreements, including joint venture, with any person, firm, association or corporation; Requirement to obtain consent of the local government authority that has territorial jurisdiction over the area chosen as site for any of Pagcor’s operations; exclusion of jai alai from Pagcor operations; and delimitation of regulatory authority and power over gaming activities covered by other existing franchises, regulatory bodies or special laws.

“By a presidential decree, the power was delegated to Pagcor to have the sole authority to authorize licenses and regulate gambling. That should not be allowed. That should only be a congressional grant of license,” Fariñas said during the hearing.

In the House, its legislative franchises committee has jurisdiction over matters directly and principally relating to the grant, amendment, extension, or revocation of franchises.

According to the Section 11, Article 12 of the 1987 Constitution, no franchise should be granted “except under the condition that it shall be subject to amendment, alteration, or repeal by the Congress when the common good so requires.” JPV