Duterte cancels trip to Marawi due to ‘foul weather’ 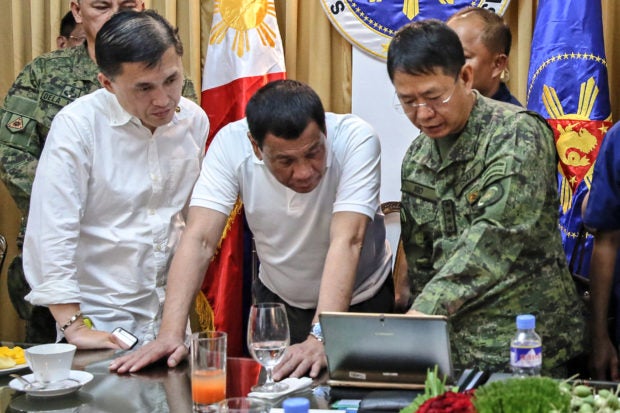 President Rodrigo Roa Duterte in a huddle with Armed Forces of the Philippines Chief of Staff Eduardo Año on matters related to the current developments on the terror crisis in Marawi City during a meeting in Davao City on May 29, 2017. With them is Special Assistant to the President Christopher Lawrence Go. PRESIDENTIAL PHOTO

Defense Secretary Delfin Lorenzana confirmed the cancellation of the President’s visit due to what he said was foul weather.

Another source earlier said security concerns were the main reason for the cancellation of the President’s visit.

Lorenzana said Duterte would push through with his Cagayan de Oro visit, also on Thursday.

He said that as of Thursday (June 8), fighting was still continuing as the extremists were still putting up pocket resistance.

“They’re still there,” he said.