Duterte chides Maranaos for letting in ‘corrupt ideology’ of IS 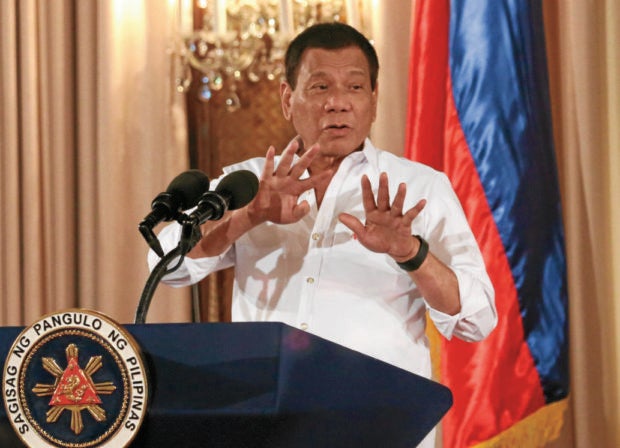 President Rodrigo Duterte on Wednesday blamed the Maranaos for allowing the “corrupt ideology” of Islamic State terrorists to destroy Marawi City as he shut the doors on any talks with the Maute Group.

(I’m very angry at them in Marawi because the Maranaos let other people in to cause trouble and bring a very corrupt ideology.)

(I’m angry at the Maranaos who let foreigners in.)

Security officials have said that foreign terrorists were among the fighters waging war against government troops.

The President said he was advised to talk to the mother of the Maute brothers Abdullah and Omar, leaders of the terror group that has been fighting government troops in Marawi City since May 23. He did not reveal who advised him.

(The number of casualties is quite heavy. They told me to speak to the Maute brothers’ mother, I said, “No, I will not.”)

“I’m sorry but we have to fight. At kung sabihin mong manalo tayo, manalo talaga tayo. Napakarami natin (And when you say we’ll win, we will really win. There are a lot of us),” he said.

The Chief Executive said the extremists would never win against the government.

“And not in a million years manalo sila sa atin. Ang liit itong giyera na ito. Were it not for the fact na we are bound by rules, I could flatten Marawi in two days. In 24 hours, tapos ‘yan. Tumbahin ninyo lahat ‘yang… ihulog mo lahat ng bomba mo,” he said.

(Not in a million years will they win. This war is very small. Were it not for the fact that we are bound by rules, I could flatten Marawi in two days. In 24 hours, it would be done. Knock it all down… drop all the bombs.)

He said the ongoing fight in Marawi City was “just a disturbance.”