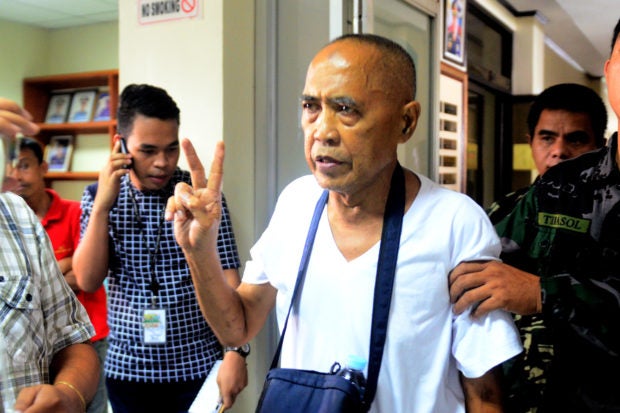 DAVAO CITY—The father of the leaders of the Maute group that has been fighting government forces in Marawi City since May 23 was arrested here on Tuesday morning.

Police said Cayamora Maute and his second wife, Kongan Alfonso-Maute, were arrested as their vehicle was stopped at a security checkpoint in Sirawan, in Davao’s Toril district.

Maute is the father of Omarkhayyam and Abdullah Maute, leaders of the Maute group that had pledged allegiance to the Islamic State (IS) group in Iraq and Syria.

Recovered from the Mautes were several identification cards and P363,000 in cash.

Esmael, the driver, said Tingao hired him in Cotabato City to transport Maute to Tagum City, where the terrorists’ father was going to seek medical treatment.

“I really did not know they were Mautes. Had I known, I would not have agreed,” Esmael said, adding that he was paid P5,000 for the use of his van.

Mondia said the Maute patriarch would be detained in the Davao City Police Office pending the filing of rebellion charges against him.

“The arrest of the patriarch of the Maute clan is a big blow to the Maute-[IS] terrorist group,” said Brig. Gen. Gilbert Gapay, spokesperson for the military’s Eastern Mindanao Command.