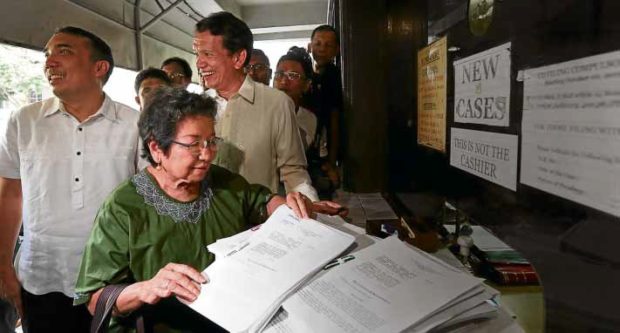 Moving swiftly, the Supreme Court announced on Tuesday that it had agreed to hear the petition of seven opposition lawmakers questioning the constitutionality of President Duterte’s declaration of martial law in Mindanao.

The court set a three-day oral argument—June 13 to 15—on the petition filed on Monday by the lawmakers, led by Albay Rep. Edcel Lagman, and directed the Office of the Solicitor General to file a comment on the case.

In a related move on Tuesday, a group of lawyers petitioned the high tribunal to compel the House of Representatives and the Senate to hold a joint session to review Mr. Duterte’s martial law proclamation and suspension of the privilege of the writ of habeas corpus following the May 23 attack by Maute terrorists on Marawi City.

“This is a rule of law petition. What we’re asking for is compliance with the minimum procedural fidelity with the Constitution,” former Solicitor General Florin Hilbay, the counsel of the petitioners, said in a news conference.

“The language of the Constitution requires it. It’s a mandatory requirement,” Hilbay stressed. “It’s very clear that the intention is for the Congress to perform a legislative review of the declaration of martial law.”

The lawyers said the congressional review of Mr. Duterte’s declaration was “meant to prevent abuse of power and to ensure popular mandate in the exercise of the President’s martial law powers.”

They said the lawmakers “unlawfully neglected” their constitutional duty to convene and tackle the issues in connection with the martial law declaration and the suspension of the privilege of the writ of habeas corpus.

Section 18, Article VII of the 1987 Constitution states, “The Congress, voting jointly, by a vote of at least a majority of all its members in regular or special session, may revoke such proclamation or suspension, which revocation shall not be set aside by the President.”

The petitioners argued that the passage of the Senate and House resolutions supporting Mr. Duterte’s decision was not enough to comply with their constitutional duty.

“These acts cannot be considered compliance with the clear constitutional requirement for Congress to convene and vote jointly,” they said.

“The failure of Congress to act as a single deliberative body cannot be substituted with separate resolutions passed by both (the House and the Senate) … Substantial compliance is no compliance,” they insisted.

The lawyers warned that “any institutional shortcut, while politically expedient, sets the dangerous precedent of allowing a total disregard of a clear mandatory obligation by the Constitution.”

Senate President Aquilino Pimentel III welcomed the filing of the petitions in the Supreme Court.

“If there are differing interpretations of a constitutional provision, then the Supreme Court should step in as the referee. Let us be guided by the Supreme Court pronouncement on the issue,” Pimentel said in a text message. —WITH A REPORT FROM CHRISTINE O. AVENDAÑO