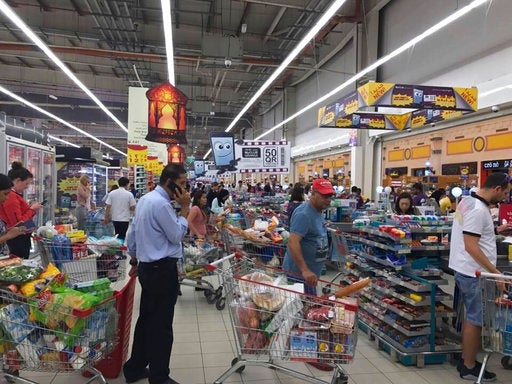 In this photo provided by Doha News, shoppers stock up on supplies at a supermarket in Doha, Qatar on Monday, June 5, 2017 after Saudi Arabia closed its land border with Qatar, through which the tiny Gulf nation imports most of its food. Saudi Arabia and three Arab countries severed ties to Qatar on Monday and moved to cut off land, sea and air routes to the energy-rich nation that is home to a major U.S. military base, accusing it of supporting regional terror groups. (Doha News via AP)

DOHA, Qatar—Qatar’s foreign minister on Tuesday called for dialogue and insisted ties to the US would remain strong despite a diplomatic storm that has seen Saudi Arabia and others cut ties with Doha.

In a speech broadcast on the Doha-based satellite channel Al-Jazeera in the early hours, Foreign Minister Sheikh Mohammed bin Abdulrahman Al-Thani also called for “a dialogue of openness and honesty” to resolve the crisis.

Saudi Arabia, the UAE, Bahrain, Egypt, Yemen and the Maldives severed ties with Qatar on Monday over accusations it supported extremism.

Qatar has denied the allegations, in the biggest diplomatic crisis to have hit the region in years.

Abdul Rahman insisted there would be “no escalation” on the part of Doha, a longtime ally of the United States which has been viewed with lingering suspicion by Washington over its leniency with groups like Hamas and the Muslim Brotherhood.

The minister said Qatar’s ties to the US were complicated, but would remain unharmed.

“Our relationship with the United States is strategic,” said Abdul Rahman. “There are things we do not agree on, but our areas of cooperation outnumber those of contention.” He did not elaborate.

Qatar hosts the largest US airbase in the region, which is crucial in the fight against Islamic State group jihadists, and is set to host the 2022 football World Cup.

The dispute comes less than a month after US President Donald Trump visited Saudi Arabia and called for a united Muslim front against extremism.

It also follows weeks of rising tensions between Doha and its neighbors, including Qatari accusations of a concerted media campaign against the kingdom and the alleged hacking of its official news agency.

Kuwait, like Saudi and Qatar a powerful member of the Gulf Cooperation Council, has remained noticeably silent on the crisis.