US turns over new weapons to Marines

The United States turned over to the Philippine Marines on Monday hundreds of new weapons two days after President Duterte said he would no longer accept secondhand equipment from Washington.

Officials from the US Embassy’s Joint United States Military Assistance Group turned over the equipment during a ceremony at the Marines headquarters in Taguig City.

“We will give this to our troops. The priority is our troops in Marawi,” said Marines commandant Maj. Gen. Emmanuel Salamat, referring to the ongoing battle with Maute group terrorists.

The weapons are part of the US Counterterrorism Train and Equip program under which P7.3 billion, or about $150 million, worth of weaponry has already been delivered to the Philippines since 2007.

Philippine officials, however, have criticized the FMS program under which the country had been repeatedly given incomplete or secondhand equipment.

“I will not accept any more military equipment that is secondhand. The ones the Americans are giving, I do not want that anymore,” Mr. Duterte told troops on Friday. 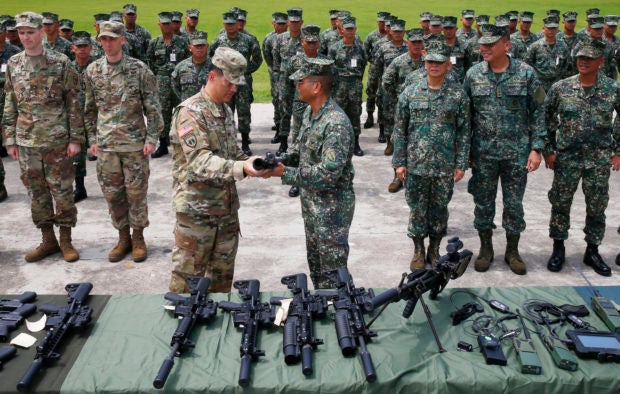 The fighting has left at least 178 people dead with hundreds still being held hostage.

One of the hostages is popular Catholic priest Teresito “Chito” Suganob.

Moro Islamic Liberation Front leader Ghazali Jaafar has asked the Maute group to release the priest and more than 200 civilians.

“We appeal to those who are still holding captive Fr. Chito (Teresito Suganob) to release him in the name of peace,” Jaafar said.