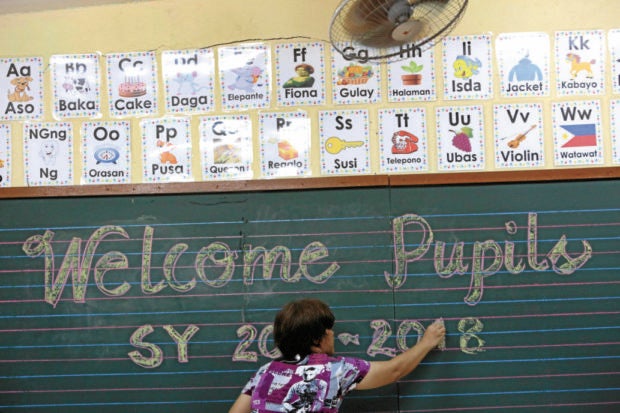 Kindergarten teacher Maritess Morales writes a welcome message for her pupils on a blackboard at the Rosauro Almario Elementary School in Tondo Manila, on the opening of classes on monday. INQUIRER/ MARIANNE BERMUDEZ

When more than 22.8 million students troop to over 50,000 public schools at the start of the new school year today (Monday), they are likely to encounter the same old problems: shortage in classrooms, teachers and other facilities and overcrowding.

“We cannot say with 100-percent certainty that everything is there,” Department of Education (DepEd) Secretary Leonor Briones said on the eve of the opening of classes.

“We are generally ready but there will be certain schools, especially in far-flung areas that cannot catch up,” Briones added.

If it’s any consolation, the problems “are not of crisis proportions,” she told a press briefing.

Of this number, 51.59 percent had been completed as of end of May, making available 55,680 classrooms.

Enrollment is expected to grow by 6 percent with 22.89 million students attending classes in 53,043 public schools—1.84 million in kinder; 13.15 million in elementary; 6.33 million in junior high school and 1.57 million in SHS.

DepEd’s projected enrollment in 22,499 private schools, which will open in different dates after June 5, is at 4.08 million, a 19-percent surge from last year’s 3.4 million. A big bulk of this population will be in junior high school with 1.3 million students; 1.27 million in SHS and 1.25 million in elementary.

Briones noted that the continuously growing student population increased the demand for classrooms, which also translated to shortages in school chairs, supplies, textbooks and laboratory equipment, especially with the SHS voucher program now in its second year.

The Alliance of Concerned Teachers on Sunday said that the DepEd also lacked 235.4 million instructional and other learning materials, 2.2 million seats for 2016 and 66,492 table-and-chair sets (45 seats and 1 teacher’s desk) and 44,538 computer packages.

The figures were based on a report made by Briones in November 2016, according to the group.

DepEd data also showed that for this school year, the agency created 40,104 new teacher items for K to 10 and SHS to address the huge demand following the full implementation of the K-12 program. Briones said they needed more science and math teachers for SHS.

Out of the 196,687 teacher vacancies it created since 2010 for kinder to Grade 10, the agency has hired 190,530 since last year to plug the shortage in public elementary and high schools. It needs 6,157 more to catch up with the seven-year backlog, data showed.

To ease congestion, Briones said double shifting would continue to be observed in some schools this year, particularly in Metro Manila, where there was a “lack of buildable space.”

“It is very clear that there is a shortage in classrooms that’s why we have two classes on a daily basis on certain cases,” she said.

“But it is not from lack of trying, the lack of technology and of knowing what the problems are. It’s because, as in the case of NCR, we really lack buildable space even as we want to build more school buildings,” she added.

The DepEd director for Metro Manila, Ponciano Menguito, said out of 780 public schools in the capital, 75 percent of elementary schools and 69 percent of high schools will continue to adopt double-shift classes.

Menguito said 2.2 million students were expected to attend classes today in the capital’s public schools, where each classroom is expected to hold 45 pupils in elementary and 46 in the secondary schools.

But he was expecting that the first day of classes won’t be as chaotic as in the previous years since the schools conducted a dry run of resumption of classes for two days last week.

“Our learners were asked to report to school so they would already know their assigned classroom and teacher beforehand and that they could have regular classes on June 5,” Menguito said in an interview.

While admitting that the country’s public school system continued to face the same old problems and that some are faced “with really truly horrible situations,” Briones stressed that it should also be acknowledged that things were changing for the better.

“We have to recognize that more schools are better prepared now,” she said.