Duterte: I want all terrorists dead 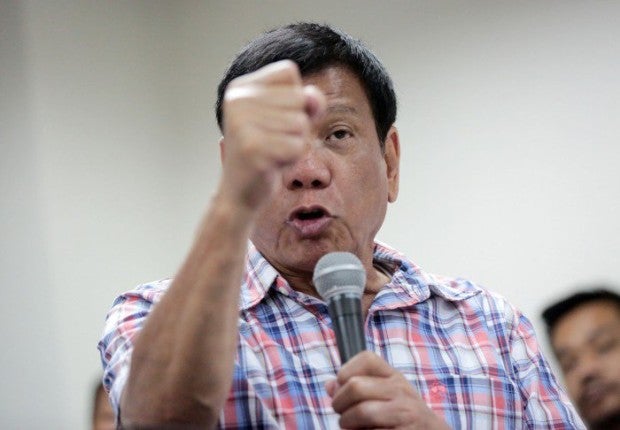 Saying he had lost many soldiers and policemen in the operation against the Maute group in Marawi City, President Duterte on Sunday night rejected peace talks and said he wanted all the terrorists holed up in the city dead.

“I will not talk to you. Whatever the leaders of the group say, I don’t care. That is why make sure you fight well because I have ordered [the military] to bring the heads of these sons of bitches,” Mr. Duterte said in a speech at Mactan-Benito Ebuen Air Base in Lapu-Lapu City, Cebu province.

Mr. Duterte said he had ordered troops to “shoot [the enemy] and shoot [them] dead.”

Airstrikes on terrorist positions in Marawi resumed on Sunday afternoon after a four-hour humanitarian ceasefire for the evacuation of civilians was marred by terrorist sniper fire.

Military jets and helicopters fired on Maute positions near the city center around 2 p.m., after the expiry of the ceasefire, military officials said.

But one team was not able to evacuate anyone after they were met with sniper fire at Barangay Banggolo, an hour and a half into the truce.

Agakhan Shareif, a Marawi civic leader involved in the rescue plan, said rescuers were nearing Barangay Banggolo when they were fired upon by a gunman from a Maute position.

An elderly woman was killed by the intermittent sniper fire, scaring off most of the trapped civilians to emerge from hiding.

Santiago said the peace corridor covered the area from Banggolo Bridge up to Quezon Avenue of Marawi, which is about 3 kilometers.

Santiago said the government did not offer anything in exchange for the truce.

She said she hoped that the military and the Maute group could implement another truce for the 1,000 to 2,000 civilians who remained trapped in the war zone.

“We should not forget them. They are the heroes who sacrificed and took the risk of going inside,” Hermoso said.

As of June 2, the Autonomous Region in Muslim Mindanao’s Humanitarian Emergency Action and Response Team reported a total of 221,275 displaced people.

Of the total number, 58,160 people are in evacuation centers while 163,115 are staying with relatives outside Marawi.

Earlier, President Duterte said the siege would be over within days.

“This will be over in about three more days,” Mr. Duterte said on Saturday after visiting a Cagayan de Oro hospital where wounded soldiers were being treated.

“I can end this war in 24 hours,” the President said. “All I have to do is bomb the whole place and level it to the ground.”

But he said he feared an increase in civilian casualties, which authorities said had reached 38 deaths as of Sunday. —WITH A REPORT FROM EDWIN O. FERNANDEZ AND RYAN D. ROSAURO, INQUIRER MINDANAO