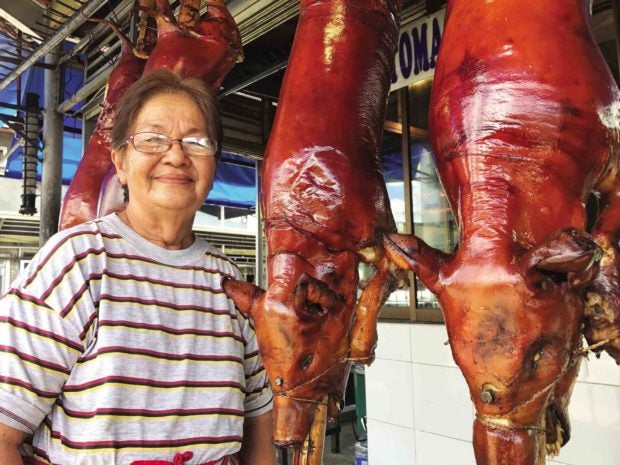 The City Hall project initially covers 14 lechon stores, including one dating back to 1952 and currently run by Cora de los Reyes, 75 —PHOTO BY JHESSET O. ENANO

Something’s saucing up the country’s ‘lechon capital’ to make it more tourist-friendly.

Famous for its rows of shops offering roasted pigs enticingly displayed on the sidewalk, Quezon CityÕs La Loma district will soon be undergoing a major makeover through an urban renewal effort recently launched by the local government.

On orders from Mayor Herbert Bautista, a technical working group for the redevelopment of La Loma was created to maximize its tourism and gastronomic potentials. With the group headed by Councilor Anthony Peter Crisologo, the project calls for a redesign particularly of the lechon stalls currently lining Amoranto (formerly Retiro) and Calavite streets.

Under the initial plan, stall owners would receive a design proposal for their shops, which will have uniform facades where they can display the lechon behind glass panels, instead of leaving them exposed to dust and pollution.

The plan also calls for the setup of a centralized slaughterhouse for all 14 lechon stalls in the area. In a statement last week, the City Planning and Development Office (CPDO) said a public lot on Mayon Avenue, Barangay Amoranto, was being considered to be the location of the slaughterhouse.

Most stall owners currently maintain their own slaughterhouses, but the CPDO observed that some operators just dump their waste on the drainage canals, adding to the causes of street floods in the area. 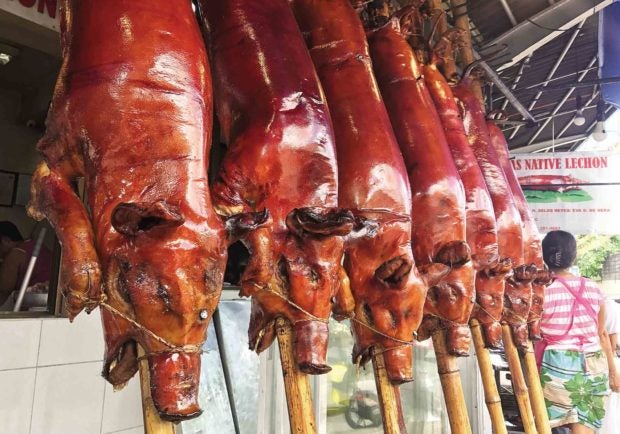 City Hall announced in March that funds for the construction of a sewage treatment plant in the area had already been secured by Quezon City Rep. Vincent Crisologo, father of the councilor heading the technical working group.

But while open to redevelopment, business owners in La Loma hoped that the coming changes would not be at the expense of their long-established practices.

Even in the midday heat, 75-year-old Cora de los Reyes patiently waited for customers as she sat beside rows of skewered, golden brown pigs in front of her store, Mang Tomas Native Lechon.

After all, if it were not for her father-in-law, Tomas de los Reyes, the area would not be the thriving food destination that it is today.

The area now called La Loma—Spanish for “the knoll”—was a rolling hill once dotted with Spanish-built blockhouses during the colonial era. Toward the end of the 19th century, it saw the fiercest battles in the Philippine Revolution.

Remarkably, before it became conducive to a porky enterprise, it hosted another crowd-drawing activity involving a different animal. In 1903, during the American period, Don Tomas Guison built a cockpit arena along Calavite Street. 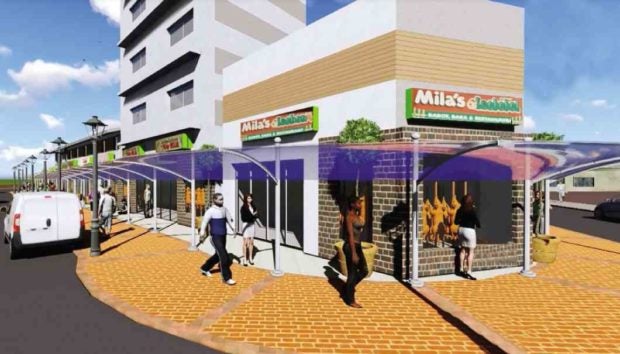 Today, the store of Mang Tomas still stands near the equally enduring La Loma Cockpit Arena, with Cora and her two children at the helm.

Told of the redevelopment plan for her district, Cora hoped that the proposed centralized slaughterhouse would be built in a convenient location. “If it’s far away, it can add much to our expenses since we don’t have our own trucks to transport the pigs.”

At present, all 14 stall owners in La Loma have individual slaughterhouses within their own premises. This setup, Cora said, allows them to maintain the freshness of the pork without resorting to refrigeration. Having a common slaughterhouse located far from the shops and coal pits might force owners to keep the pigs in freezers for a considerable period and lose the quality that a La Loma lechon is known for, she added.

“If we want to be truly attractive to tourists, our businessmen have to be resilient [to the changes],” said Chua, who also served as president of La Loma Lechoneros Association.

The association was formed in the early 1990s as a way to ensure that the local lechon would remain of the highest quality. It has also been overseeing the annual La Loma festival where roasted—and gaily decorated or costumed—pigs are paraded in the streets.

Chua said the association remained in continuous dialogue with local government officials regarding the redevelopment project.

He admitted that “we are really a source of air, water and land pollution, especially since we slaughter pigs in the area. But we cannot compromise our environmental concerns, so we must minimize the pollution we create.”

“Aside from the issue of transporting pigs (to the new slaughterhouse), volume would also be an issue especially in December,” he said. Demand during Christmas season can go as high as 3,000 pigs a day, from an average of 200 on regular days.

The association president also worries for the residents near Mayon, who may have to deal with the noise and smell once a big slaughterhouse starts operating in their neighborhood.

“At least here in our area, people are used to the noise,” the village leader said in half-jest. “It’s just like music to their ears now.”

Also just behind the proposed slaughterhouse location is E. Rodriguez Jr. High School, which Chua said could raise another set of problems.

Chua said he was also wary of a future where their “modernized” shops would be made to use ovens instead of the traditional coalpits. For one, this would drive up prices, he said.

But Chua said lechoneros like him remained open to the changes that would come to their businesses and their community. “Of course, we want the area to be developed, so we can have more people coming here and tasting our lechon,” he said. “In the end, many more lechon stalls may even come here to sell.”