President Rodrigo Duterte on Saturday said a predawn attack on Resorts World Manila that left the gunman and 37 other people dead was the work of a “crazy man,” dismissing a claim by a top ally in Congress who insisted that the violence was the work of a “lone wolf” terrorist.

“It’s not Isis,” Mr. Duterte told reporters in Cagayan de Oro, referring to the Islamic State (IS), which had earlier claimed responsibility for the Friday attack.

He insisted the gunman apparently “did not want to kill” but set the place ablaze after stealing millions worth of casino chips. “That is not the work of Isis. The work of the Isis is more cruel and brutal. They would simply kill people for nothing, not even for a reason,” Mr. Duterte said.

Speaker Pantaleon Alvarez earlier disputed the conclusion of authorities that the attack was a simple case of armed robbery and arson.

“This is a clear example of a ‘lone wolf’ terrorist attack targeting civilians to inflict maximum loss of life and damage to property, as what has happened in other countries,” said Alvarez, a close political ally of President Duterte.

However, he did not say how he arrived at his conclusion, which was in stark contrast to what Director General Ronald dela Rosa, Philippine National Police chief, had stated.

The attack occurred at a sprawling gambling complex near the airport that includes hotels, restaurants and stores.

Police said that during the attack the man stole more than $2 million worth of casino chips, though he abandoned them in a toilet soon after.

Resorts World on Saturday presented a video footage of the incident showing the gunman alighting from a cab and walking into the hotel, up an elevator and into a gaming area.

He ignored a metal detector and walked past an unarmed female security guard who appeared helpless to stop him, as people cleared the floor and scampered to safety.

He then made his way to the gaming area unchallenged, poured gasoline he was carrying in small plastic containers on at least two baccarat tables, and set them afire.

He then proceeded to a hotel bar and then to slot machines, which he also torched. He then went to the cage area and grabbed what appeared to be casino chips. He fired shots into the air.

The footage then showed several security personnel armed with long rifles pursuing the suspect, and firing shots toward the gunman who returned fire but appeared to be unfazed. He was seen limping away, apparently wounded.

He then went up the stairs that took him to a hallway where he kicked open the door of Room 501, which appeared abandoned. The suspect later was shown setting afire linen he had found, before going back inside the room where police said he later killed himself.

Police originally said he arrived at the hotel in a car, but changed that to a cab, and they had described him as Caucasian and English-speaking but the cab driver told them he spoke in Filipino.

Police said they had yet to establish the man’s identity, amid some public fears he may be linked to IS.

“We rule out terrorism unless new evidence crops up. Maybe when we establish the gunman’s identity we can find links to terrorism,” Dela Rosa said. “Until then, evidence points otherwise.”

He said IS, which had claimed carrying out the attack, was known to attach itself to earlier incidents, including a gang war earlier in Manila that they claimed was a succesful terror attack.

Director Oscar Albayalde, National Capital Region Police Office chief, said the cab driver told police the suspect was picked up at San Lazaro, and that “he wanted to listen to the news” as they made their way to the casino.

“He did not talk much. The driver said he was a man of a few words,” Albayalde said, quoting the driver, who said the man spoke Filipino.

But Alvarez said this should serve as a wake-up call for the police and the military to cooperate closely in making the seat of government as well as the financial and business center safe from any terrorist attack, whether by “lone wolves” or heavily armed terrorist contingents, as what happened in Marawi City.

The attack in Resorts World lasted about six hours and caught authorities off guard with security forces focused on ongoing violence in Marawi City amid a state of martial law prevailing over Mindanao.

The violence forced the casino-hotel to evacuate its 12,154 guests and staff, but 37 were later found to have been trapped and died due to smoke inhalation.

Stephen Reilly, Resorts World chief operating officer, said on Saturday the company was giving P1 million to each of the families of the fatalities.

“Yesterday, we lost so many lives because of this senseless act. We hope that we will be able to help,” he said.

One of the victims who died after inhaling smoke was Elizabeth Panlilio Gonzales, the wife of Pampanga Rep. Aurelio Gonzales Jr. Alvarez expressed the House’s “profound sorrow” at the incident.

Police were examining a car that the gunman left in a complex parking garage, authorities said. Senior Supt. Tomas Apolinario, chief of the Southern Police District, said the car’s owner was being questioned and had denied knowing the gunman.

The attack sent hundreds of people fleeing the complex. A South Korean died of a possible heart attack suffered during the evacuation, the South Korean foreign ministry said. More than 70 people suffered mostly minor injuries in the stampede to escape.

Family members of employees spent hours waiting for news about their relatives, hoping that they had survived.

“She was asking for help because she said it was suffocating on the second floor area where she was,” a distraught Yongco said as he stood outside Maxims Hotel, adding that his daughter did not call again.

Hours later, when company officials announced the names of employees who perished in the attack, Hazel Anne was first on the list of 23 employees.

Ronald Romualdo, a Resorts World maintenance worker, said he and his colleagues heard gunshots and saw people smashing windows on the second and third floors to escape.

“We took out a ladder to save them. We were able to save many of them,” he said. “But one woman I was trying to save fell from the second floor …. I could not carry her.”

He said the woman was not moving after she fell, but he didn’t know what happened to her. —With a report from AP /atm 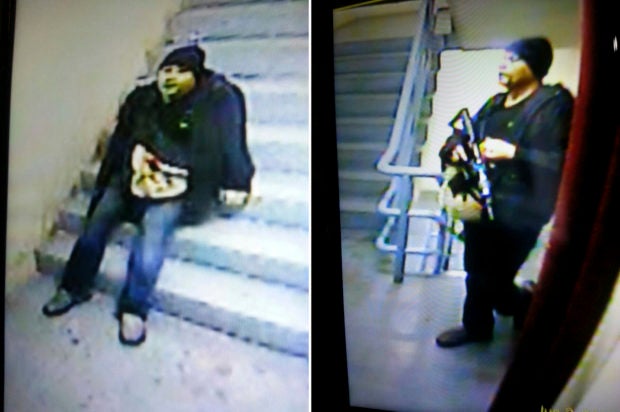 This image made from closed circuit television made available by the Philippine National Police on Friday, June 2, 2017, shows the gunman at the Resorts World Manila complex in Manila, Philippines. A gunman stormed a casino in the Philippine capital and torched gambling tables in the crowded space, creating a choking level of smoke that killed dozens, authorities said. The gunman stuffed a backpack with casino chips before he fled but was found dead in an adjacent hotel early Friday. (Philippine National Police via AP)