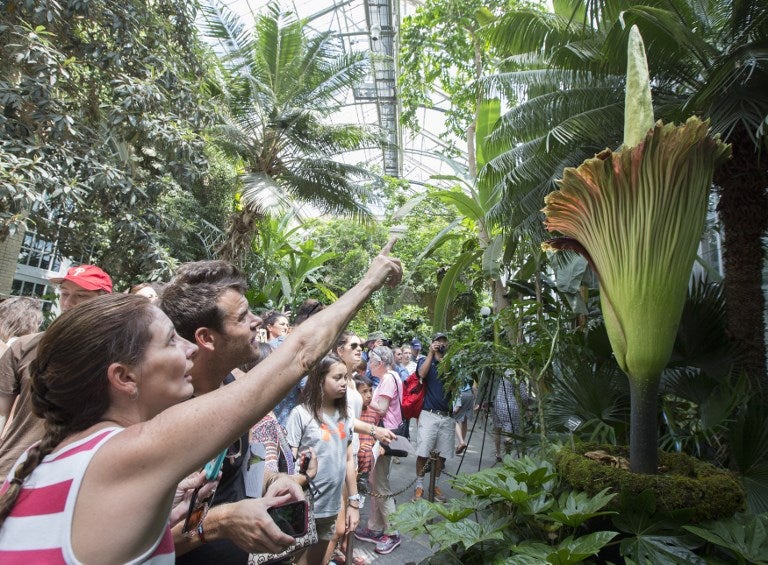 Tourists view the Corpse Flower at the US Botanic Garden in Washington, DC on August 2, 2016.
The USBG’s Titan Arum (Amorphophallus titanium), also known as the corpse flower or stinky plant for its smell often compared to rotting meat, is native to Sumatra Indonesia and is expected to bloom for 24 to 48 hours before collapsing. / AFP PHOTO / CHRIS KLEPONIS

It is unusual enough to see one of nature’s biggest, rarest — not to mention smelliest — flowers bloom. But it is extraordinary to see two bloom at once.

That is why two seven-foot-tall corpse flowers at the Chicago Botanic Garden have attracted thousands of visitors this week, despite the smell of rotting flesh that the flowers emit to attract pollinating beetles and flies.

The rare flowers, officially called titan arum, are naturally occurring in just one place on Earth — the Indonesian island of Sumatra. They are threatened by deforestation, and botanic gardens around the world are cultivating and preserving them.

It takes up to 10 years for one plant to flower, and then it does so for about one day.

“Having twin corpse flowers both bloom at the same time is very rare,” said Greg Mueller, chief scientist at the botanic garden.

The Chicago Botanic Garden checked with its counterparts around the world and found only a handful of times that such an event has happened, and it has never before occurred in North America.

“This is one of these plants that are just so exciting,” Mueller said.

The garden will continue to display the plants until June 8, and expects to draw many more thousands of enthusiasts come to observe the huge structures, even though the flowers have already closed back up, and are beginning to wilt.

But even more exciting for scientists, they have managed to pluck away precious seeds to send to other gardens.