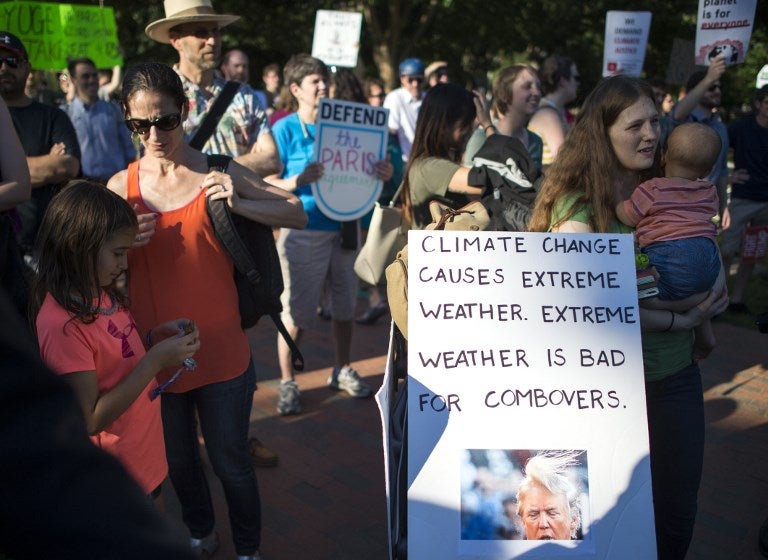 Protesters listen to speakers and hold up signs during a rally against the United States backing out of the Paris Climate accord, in front of the White House in Washington, DC on June 1, 2017. US President Donald Trump earlier announced America is “getting out” of a deal he said imposed “draconian” burdens that would cost the US millions of jobs and billions in cold hard cash. / AFP PHOTO / Andrew CABALLERO-REYNOLDS

President Donald Trump announced America’s shock withdrawal from the Paris climate accord Thursday, a policy shift with potentially wide-ranging repercussions for the environment and Washington’s ties with the world.

In a staunchly nationalist statement from the White House Rose Garden, Trump announced the United States would stop implementing the “bad” 2015 deal and look to renegotiate it — or begin work on a new one.

“I cannot, in good conscience, support a deal that punishes the United States,” he said.

Trump painted the deal — struck by predecessor president Barack Obama — as a capitulation that was too hard on the United States, went too easy on India, China and Europe, and did not “put America first.”

“As of today, the United States will cease all implementation of the non-binding Paris accord and the draconian financial and economic burdens the agreement imposes on our country,” he said.

“We’re getting out but we’ll start to negotiate and we will see if we can make a deal that’s fair. And if we can, that’s great. And if we can’t, that’s fine.”

The United States is the world’s second largest emitter of greenhouse gases after China, so Trump’s decision could seriously hamper efforts to cut emissions and limit global temperature increases.

In a campaign-style address that echoed his America-first election message, Trump said “we don’t want other leaders and other countries laughing at us anymore. And they won’t be.”

“I was elected to represent the citizens of Pittsburgh, not Paris,” he added.

Trump’s decision to quit the 196-party accord sparked a wave of indignation both at home and abroad, with Obama breaking his post-election silence to say the United States was “joining a handful of nations that reject the future.”

Nicaragua and Syria are the only countries not party to the Paris accord, the former seeing it as not ambitious enough and the latter being racked by a brutal civil war.

European leaders were uncharacteristically blunt in their condemnation and unceremoniously slapped down Trump’s suggestion that a new deal was up for debate.

“The agreement cannot be renegotiated,” France, Germany and Italy said in a joint statement.

At home, US mayors and governors also lashed out, including Pittsburgh Mayor Bill Peduto, who took issue with Trump’s invocation of his city.

“As the Mayor of Pittsburgh, I can assure you that we will follow the guidelines of the Paris Agreement for our people, our economy & future,” he tweeted.

Ever the showman, the 70-year-old had given his decision a reality-TV-style tease, refusing to indicate his preference either way until his announcement.

That had prompted last-minute pressure from business tycoons, foreign allies and from inside his own White House not to pull out of the accord.

Opponents of withdrawal — said to include Trump’s own daughter Ivanka — had warned that America’s reputation and its leadership role on the world stage is at stake, as is the environment.

A dozen large companies including oil major BP, agrochemical giant DuPont, Google, Intel and Microsoft, had urged Trump to remain in the deal.

In the wake of the announcement Tesla and SpaceX boss Elon Musk announced he would no longer take part in presidential business councils.

“Climate change is real. Leaving Paris is not good for America or the world,” he said.

White House officials were unable to provide firm details about how and when the US would leave, but acknowledged that under the deal formal withdrawal may not take place until after the 2020 election.

Trump had raised alarm bells when he refused to sign up to a pledge on the deal at last week’s G7 meeting in Italy.

Hours ahead of Trump’s announcement, China’s Premier Li Keqiang pledged to stay the course on implementing the climate accord in a joint press conference with German Chancellor Angela Merkel, and urged other countries to do likewise.

China has been investing billions in clean energy infrastructure, as it battles to clear up the choking pollution enveloping its biggest cities.

China and the US are responsible for some 40 percent of the world’s emissions and experts had warned it was vital for both to remain in the Paris agreement if it is to succeed.

The leader of Asia’s other behemoth, Indian Prime Minister Narendra Modi, has said failing to act on climate change would be “morally criminal”.

Trump’s announcement comes less than 18 months after the historic climate pact was adopted in the French capital, the fruit of a hard-fought agreement between Beijing and Washington under Obama’s leadership.

The Paris Agreement commits signatories to efforts to reduce greenhouse gas emissions that cause global warming, which is blamed for melting ice caps and glaciers, rising sea levels and more violent weather events.

They vowed steps to keep the worldwide rise in temperatures “well below” two degrees Celsius (3.6 degrees Fahrenheit) from pre-industrial times and to “pursue efforts” to hold the increase under 1.5 degrees Celsius.

Since taking office on January 20, Trump, who has called climate change a “hoax”, has sent contradictory signals on the Paris deal.

When asked Tuesday whether Trump believes human activity is contributing to climate change, White House spokesman Sean Spicer told reporters, “Honestly, I haven’t asked him that. I can get back to you.”

Since then a range of White House aides have refused to speculate on the president’s views.