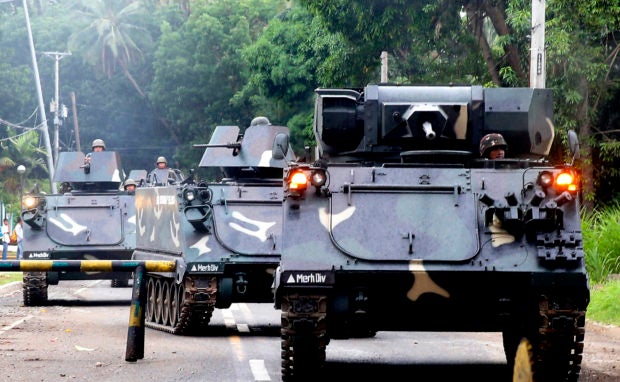 Tanks arrive at a military camp in Iligan city to reinforce Government troops who are battling Muslim militants who laid siege in Marawi city for over a week now Wednesday, May 31, 2017 in southern Philippines. (AP Photo/Bullit Marquez)

MARAWI CITY—An estimated 3,700 people were still trapped in Marawi on Thursday as government forces continued sporadic gun battles against members of the Abu Sayyaf and Maute group in the Islamic city, according to the International Committee of the Red Cross (ICRC), which is working to ensure their safe evacuation.

In Manila, ICRC Philippine delegation head Pascal Porchet told the Inquirer that the humanitarian aid group has been able to communicate with members and persons “close to” and “directly involved” with the Islamic State-linked fighters and the Philippine military, requesting safe passage for those still trapped in Marawi.

Porchet said he could not give details of ICRC’s contacts and refused to comment on the response to its request.

“But the most important thing is, we are here to work hand in hand with the parties involved to ensure the safety (and well-being) of the people,” Porchet said. “We just hope the civilians will be able to flee safely, and will soon be rescued.”

The trapped residents are running out of food and water and remain fearful and insecure, ICRC said. The most vulnerable of them have no money for transportation, according to the aid group.

The fighting since May 23 had made it difficult to reach areas where civilians had sought refuge but the ICRC said it was able to rescue 500 civilians following dialogues with those involved in the fighting, which left large patches of the city in ruins.

“We are extremely concerned about the impact of the hostilities on the civilians. Our priority is to address the humanitarian needs of the affected people,” the ICRC said in a report. “We are seriously concerned about reports of civilians who were killed or deliberately targeted, or being held against their will. Civilians are not part of the fighting; they should be protected.”

Several members of the ICRC are on the ground to help people affected in the armed conflict.

The Humanitarian and Emergency Action Response Team (HEART) of the Autonomous Region in Muslim Mindanao (ARMM) on Thursday said it has recorded a total of 218,665 people displaced by the fighting as of May 31.

Only 30,645 individuals or 6,129 families have taken shelter in evacuation centers in nearby cities such as Iligan and Cagayan de Oro and as far away as Davao City, HEART said. Majority of the displaced have sought refuge in homes of relatives, it added.

ICRC said many displaced residents had fled to the towns of Saguiaran, some 10 kilometers from Marawi, and Balo-i in Lanao del Norte, about 21 km from the besieged city.

It said it was also prepositioning medicines and medical supplies in evacuation centers to prepare for any outbreak of diseases.

The aid agency said it also distributed water containers for clean water for the evacuees.

“Access to food and clean water as fighting escalates remain to be the most urgent need of the evacuees,” the ICRC said. —WITH REPORTS FROM JEOFFREY MAITEM, JODEE A. AGONCILLO, ALLAN NAWAL AND JUDY QUIROS