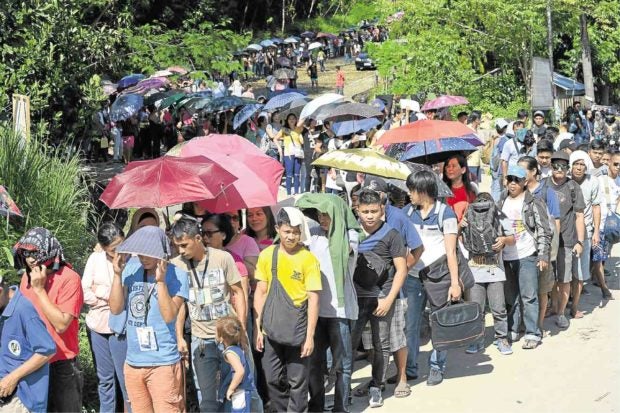 JOURNEY TO SAFETY Residents fleeing the fighting in Marawi City queue at a government checkpoint as they make their way to Iligan City, where they will seek refuge in evacuation centers. — AFP

ILIGAN CITY—Abdulwahid Macabangon, 96, and a 3-year-old great-grandson are holed up in a house in Pindoguan, Bubong Ramain in Lanao del Sur province, away from the scene of fighting between Islamic State-inspired militants and government forces in Marawi City.

But relatives and family members who are now in Iligan have worried about their food and medical needs and have been seeking help to have them evacuated. In going to the place, one has to pass by Marawi, and access is still barred by authorities because of continued clashes as the crisis wore on for 10 days now.

The possibility of rescuing the Macabangons and other civilians still trapped in the besieged city may come soon with the setting up of a “peace corridor,” a neutral zone where humanitarian groups may evacuate wounded and trapped civilians, and retrieve the dead, or provide safe space so food and other supplies will reach rural areas.

The idea of a peace corridor was taken up during President Duterte’s meeting with leaders of the Moro Islamic Liberation Front in Davao City on Tuesday.

“Having such a space will hopefully contribute to easing the humanitarian situation in Lanao del Sur,” said Abul Alibasa, a Marawi-based broadcaster now staying in Iligan.

Alibasa, a volunteer relief worker for Ranao Rescue Team, said there was a need to bring in food supply into towns where evacuees were staying.

According to Pendatun Disimban of Bangsamoro Solidarity Network, food supply has tightened in several towns as indicated by the increase in the prices of basic goods.

Disimban said their local monitors reported that in Tamparan town, for example, rice was sold at P5,000 per 50-kilogram sack or P100 a kg, more than 120-percent increase from its price prior to the crisis.

“If this situation persists, we are worried that both evacuees and host families could go hungry,” Disimban said.

Although the stretch of towns in the outskirts of Marawi up to Butig are rice-producing areas, the bulk of milling operations are in the city where power supply is relatively stable. Hence, much of the supply of milled rice from the harvest two months ago are trapped in Marawi.

Contributing to the shortage of food supply is the stringent controls imposed by the military for the entry of goods brought by traders and relatives of evacuees through Malabang, in the province’s southern part.

“This situation must be addressed immediately. We cannot allow the specter of hunger for the evacuees,” Disimban said.

On Tuesday, civil society, religious and traditional leaders of Lanao del Sur renewed their appeal to Mr. Duterte “to take decisive steps to ease the humanitarian situation” in the province.

In a joint statement, the Maranao leaders also appealed for the President to consider ways to end the armed hostilities in order to prevent the further destruction of the city.

Maranao leaders said their people “are dying to return to our homes” as “there is no better place like home … in this time of Ramadan.”

The number of displaced individuals from Marawi City increased as the fighting entered its eighth day on Wednesday, the Humanitarian and Emergency Action Response Team (Heart) of the Autonomous Region in Muslim Mindanao said.

Based on the latest figure that Heart released, there were now 28,011 families—consisting of 140,155 people—which fled the fighting between government forces and members of the Maute terror group and Abu Sayyaf bandits.

Of the number, only 30,645 individuals or 6,129 families were in evacuation centers in nearby areas such as Iligan City and as far as Cagayan de Oro City.

Read Next
Last Mass in Bacolod church brings people to tears
EDITORS' PICK
Leaked: A 60x Zoom and all-new Helio G96 mean a complete overhaul for TECNO Mobile’s new CAMON 18 series
Delivering delight against all odds
Duterte blasts rights groups for overlooking the ‘other side’ of drug war
Lacson wants DOF to suspend TRAIN law as oil prices rise
153 protests filed vs China actions in PH waters in 2021 — DFA
Next level mobile photography within reach with vivo X70 co-engineered with ZEISS
MOST READ
Robredo to supporters: Be calm, gentle and do good deeds
Duterte inaugurates P684-M bypass road project in Quezon
Matibag calls Senate budget hearing ‘political,’ gets kicked out
Duterte: No drug dealers among the rich in PH
Don't miss out on the latest news and information.