Former Senator Rene Saguisag hit lawmakers on Thursday for acting like “echoes” of President Rodrigo Duterte, instead of “voices” of the people.

The former senator was at the Senate for the necrological service for the late Senator Eva Estrada Kalaw.

(Now we have here the Senate and the House, that’s it, they are not voices, they are echoes. Whatever Digong says, they just respond yes sir, yes sir) 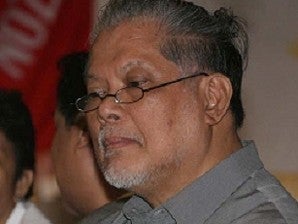 The Senate, voting 17-5, had approved a resolution supporting the martial law declaration in Mindanao. Voting 12-9, the chamber also junked the minority group’s bid for a joint session of Congress to deliberate on the declaration.

Asked if Congress had lost its chance to speak out on martial law after junking the proposed joint session, Saguisag said: “May Congress ba tayo? Puro tameme (Do we have a Congress? They’re all tight-lipped)

He said Congress should have called a joint session to put on record the lawmakers’ individual stand on martial law.

“At least formality, dahil history will look at what happened and each congressman, each senator should go on record on where they stand on it and give a legally tenable, intellectually respectable and psychologically and satisfying basis kung bakit ang position nila ay pro or anti (on why their position is pro or anti),” the former senator said.

Even neophyte Senator Manny Pacquiao did not escape Saguisag’s criticisms.

Saguisag noted that despite reports that the Maute terrorist group had slipped into Pacquiao’s home province, Sarangani, the boxer-turned-politician continued with his training.

(That’s why it is very obvious in the newspaper there had been Maute getting their way to Sarangani. It is fitting that the congressman or senator from the place: I am cancelling my flight, I am going home to Sarangani to help my people… I feel sorry for our country, our children and grandchildren) JPV/rga