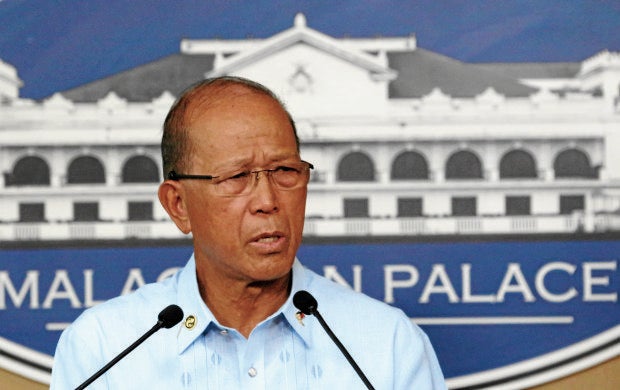 MANILA — Defense Secretary Delfin Lorenzana and left-wing groups are blaming each other for the suspension of the peace talks between the Philippine government and the National Democratic Front of the Philippines (NDFP) following President Duterte’s declaration of martial law in Mindanao.

Lorenza said in a statement on Wednesday that he and other government officials recommended the suspension of peace talks with communist rebels, but President Duterte was the one who decided to withdraw from the latest round of negotiations in the Netherlands.

Lorenzana made the statement after the militant fisherfolk group Pamalakaya (Pambansang Lakas ng Kilusang Mamamalakaya  ng Pilipinas) blamed him for the stalled talks with NDFP, the political wing and the peace negotiator of the Communist Party of the Philippines (CPP) and its armed wing, the New People’s Army.

“While I am flattered by Pamalakaya’s assertion that I was to blame for the suspension of the fifth round of talks … the truth is that my participation in government decision-making is purely recommendatory,” Lorenzana said.

“It is the President who makes the final decision. The suspension of the peace negotiation was his decision based not only on my input but the whole government bureaucracy,” he added.

On Saturday, the government peace panel announced in the Dutch city of Noordwijk that it was withdrawing from the latest round of talks in protest against the CPP order to the NPA to step up operations against security forces following the President’s May 23 martial law declaration in Mindanao.

Lorenzana said Pamalakaya’s “narrow-mindedness” prevented it from seeing that the government’s withdrawal from the talks was due the announced offensives by the NPA.

“To blame someone else is the height of naiveté,” Lorenzana said.

On Monday, Pamalakaya chair Fernando Hicap called Lorenzana a “highly dangerous” threat to the talks and demanded the “peace saboteur and warmongering secretary” to resign.

“We can’t expect these peace negotiations to prosper when this anti-peace is in the picture,” Hicap said.

On Sunday, a day after the government announced the cancellation of the latest round of talks, Bayan secretary general Renato Reyes said the martial law declaration “undermined the conducive environment for the peace talks.”

“It was the repeated provocative statements of [Lorenzana] and the [Armed Forces of the Philippines] which undermined the conducive environment for peace talks,” Reyes said.

Reyes was referring to Lorenzana’s explanation for placing the entire Mindanao under martial law last Tuesday.

Lorenzana said: “Because there are also problems in Zamboanga, Sulu and Tawi-Tawi and also in Central Mindanao, in the BIFF area. And we also have some problems in Region 11, the extortions by the NPA.”

The CPP, believing it was also a target of the martial law declaration, called for active resistance to military rule and ordered the NPA to accelerate recruitment of new guerrillas and to “plan and carry out more tactical offensives across Mindanao and the entire archipelago.”

Lorenzana later clarified that the NPA was not a specific target, but warned that CPP-NPA members engaged in criminal acts “will be dealt with with or without martial law.”

In his statement on Wednesday, Lorenza said a ceasefire was not a precondition of the talks but questioned why the rebels could not agree to a truce during negotiations.

“Why is the NPA and its front organizations so averse to have a bilateral ceasefire while we are talking if we seek peace?” he said.

“Is it because they will lose their extortion money that now runs into hundreds of millions of pesos every year? So they can continue committing terrorist acts like kidnapping, burning of equipment and buildings and attacking government forces?” he added.

The two sides were actually scheduled to discuss a proposed bilateral ceasefire agreement as well as socioeconomic and political reforms when the latest round of talks were cancelled.  SFM/rga