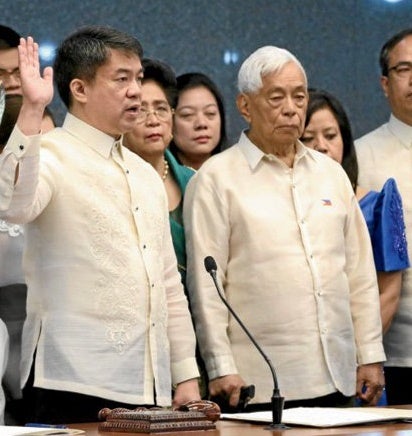 Unlike his son and namesake, former Senate President Aqulino “Nene” Pimentel Jr. believes that Congress should deliberate on the martial law declaration in Mindanao and he  urged the people to “speak out” and “demand” for it.

His son, incumbent Senator Aqulino “Koko” Pimentel III, however, was among the 12 senators who thumbed down a resolution calling for a joint session of Congress to tackle President Rodrigo Duterte’s declaration of martial law.

While saying Duterte’s martial law declaration had basis, Nene Pimentel said it should not be imposed over the whole Mindanao.

“Medyo sa tingin ko alanganin because not all of Mindanao is affected by the trouble. But saying that I can also project the situation that the President knows more about the threats than we do. That’s why he’s obligated to report to Congress…” he told reporters in an interview at the Senate on Thursday.

The former Senate leader was at the chamber for the necrological service for the late Senator Eva Estrada-Kalaw, who passed away last May 25 at the age of 96.

Nene Pimentel also believes that the Constitution clearly provides that Congress should call a joint session to deliberate on the declaration.

“I still believe that under our Constitution, Congress —meaning to say, both houses, the Senate and the House of Representatives, if they are not in session they must call a special session within 48 hours from the declaration of martial law by the President, who is obligated to report …” he said.

He also contradicted some lawmakers’ argument that Congress should only call a joint session if it’s going to revoke a martial law declaration.

“Revoke, extend, justify. In other words, do their function to report to the people because they are the representatives of the people,” he said.

“That’s why I’m saying people should speak out. We’re a democracy. Huwag tayong papayag-payag lang na kung ano ang gawin nila okay lang. No, kung mali sila we’ll tell them mali sila (We should not just let them do whatever they want. If they are wrong, we tell them that they are wrong),” he said.

Asked if his son had sought his advice on those issues, the former Senate leader said in jest that he had already asked the National Bureau of Investigation to locate him.

Turning serious, Nene Pimentel said he has always allowed his son to do his duty without influencing him.

The incumbent Senate leader, Koko Pimentel, is a staunch ally of the administration as the president of PDP-Laban, the party now being chaired by Duterte. IDL/rga