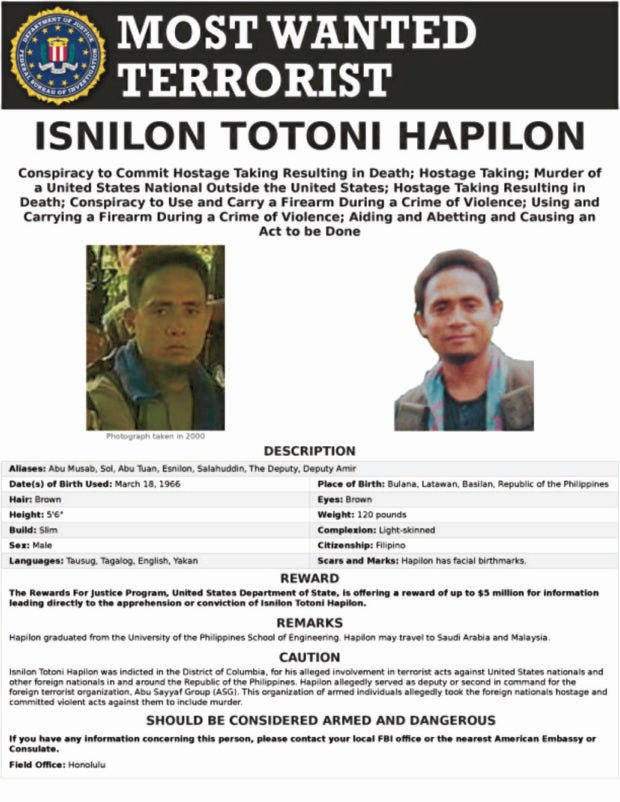 A blogger who was appointed presidential assistant communications secretary, Uson has been repeatedly called out for spreading fake news.

Now, it’s the FBI being called out—for claiming that Abu Sayyaf leader Isnilon Hapilon  “graduated from the University of the Philippines School of Engineering.”

The US government is offering “up to $5 million for information leading directly to the apprehension or conviction of Isnilon Totoni Hapilon,” whom it accuses, among other things, of murder of an American citizen and of hostage-taking resulting in death.

Not in UP records

As information of Hapilon being a UP engineering graduate spread, the University of the Philippines said its records showed no Isnilon Hapilon on its roster of students or graduates.

“Upon verification with the official records of the Office of the University Registrar and the Office of Alumni Affairs, the University of the Philippines can find no record of a former student or alumnus by the name of Isnilon Hapilon,” UP vice president for public affairs Jose Y. Dalisay Jr. said in a statement.

Dalisay said UP was issuing the clarification “in light of recent news reports identifying Mr. Hapilon as a UP graduate.”

It turns out that Hapilon is a high school dropout, according to records from Basilan National High School.

Gov. Mujiv Hataman of the Autonomous Region in Muslim Mindanao (ARMM) obtained Hapilon’s Secondary Student’s Permanent Record following reports that the bandit leader, who is now leading the war in Marawi City against government forces, was a UP engineering student.

“It’s not true. I wonder where the US-based intelligence operatives got those information,” Hataman said, referring to social media reports citing FBI data.

Tahira Ismael, a former mayor of Lantawan and madrasah (Islamic school) classmate of Hapilon, said he was shocked by social media reports portraying Hapilon as having studied at UP.

“He performed poorly in academics. Even in Quran reading, trying hard. He found it hard to pronounce Quran in one of the Quran-reading contest in our younger days,” Ismael told the Inquirer in an interview.

He said Hapilon dropped out of Basilan National High School.

“I was a graduating student then. After that, I never heard from him because I left Basilan to study in Manila,” said the former mayor.

Hataman said that based on Hapilon’s school records, he was born on March 10, 1968—not March 18, 1966, as reported by the FBI. His mother, Harija Hak, enrolled him at Basilan National High School.

School records showed the six-year elementary education of Hapilon at Maluso Central School, where he got an average grade of 78 percent when he was a sixth grader.

When he was graduating from that school, his report card showed many absences and instances of tardiness. He was then about 12 years old. He was poor in English and Science, but had a fair performance in Mathematics.

Hapilon only reached second year high school. His sophomore report card showed improvement in his grades—an average of 81. He was in Section Lapu-Lapu.

Hapilon is a native of Bulanza village in Lantawan, but he finished elementary education at Maluso Central School in 1984.

“It was still martial law at that time and what I know, he started to become active in madrasa school,” Hataman said.

“Academically, he was struggling. Even in Arabic and Quran, he was quite poor, but he was already assertive. In his elementary days, he was so quiet, occasionally smiling. He had few friends and he spoke less among his few friends then,” said the ARMM governor.

Hataman said that when Hapilon dropped out of high school, he was reportedly spotted joining the Moro National Liberation Front (MNLF). He underwent training at Camp Omar in Sumisip town under the leadership of Commander Talib Congo in 1985.

In 1986, Hapilon left Basilan to join the MNLF in Sulu under Commander Ustadz Bashiri. While he was with the rebel group, he took Arabic and madrasa education again.

In 1992, he returned to Basilan and became the spokesperson of Barahama Sali, whose group took several hostages, including Fr. Cirilo Nacorda.

At the height of the military offensive in 1994, Sali’s group fled to Sampinit in Basilan, when troops took over the Camp Al Medina in Kapayawan, also in Basilan.

Hapilon joined the group of Abu Sayyaf leader Abdurajak Janjalani in Sampinit. He abandoned his madrasa and Arabic training, and followed Janjalani, who became his immediate religious and Arabic adviser.

Hapilon came from a poor farming family. His father, Hapilon Totoni, was a village imam (Islamic priest), while his mother Harija Hak was a housewife. He has five siblings—Nasser, Sahinon, Jubaira, Bohaira and Bakkar.

Ismael said all the Hapilons, including distant relatives, left Basilan in 2000 when there was a crackdown on the Abu Sayyaf.