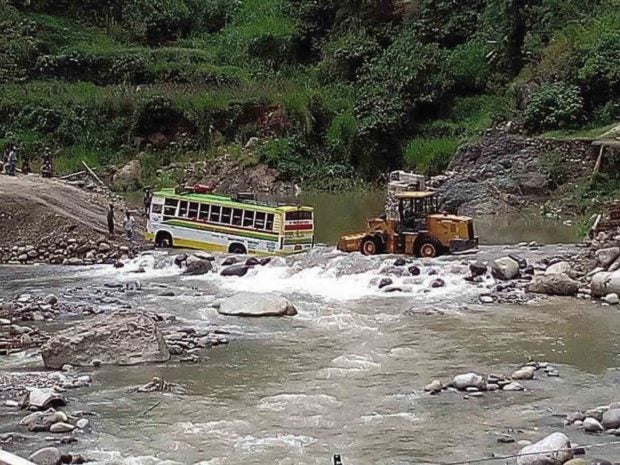 A bus crosses a river after a strong current washed out a makeshift detour bridge linking the Baguio-Bontoc section of the national highway in Mt. Province. —CONTRIBUTED PHOTO

On May 27, strong river currents washed out the makeshift detour bridge that links the Baguio-Bontoc section of the national highway at Barangay Nacagang in Sabangan town, also in Mt. Province.

Delivery and freight trucks from this city have been taking the longer route via Banaue town in Ifugao province, adding two hours to the six-hour trip to Bontoc town in Mt. Province via the Halsema Highway.

Travelers, who chose to avoid the longer route, cross the river at Sabangan using a foot bridge. They then wait for passenger vehicles to ferry them to Bontoc.

Rock slides have also affected a 1-kilometer stretch of road at Sitio Tikitik in Barangay Bontoc Ili in Bontoc.

The Calaccad Road at the junction of the towns of Barlig, Natonin and Paracelis, all in Mt. Province, was also closed on Wednesday.

On Tuesday, rains triggered a landslide that cut access to the Banaue-Hungduan-Benguet Road in Ifugao. Debris obstructed passage through the Abra-Kalinga Road in Licuan-Baay town in Abra province.

In Baguio City, motorists were asked to take Marcos Highway, instead of Kennon Road, which was prone to rock slides.

The Philippine Atmospheric, Geophysical and Astronomical Services Administration said 26 to 50 millimeters of rain fell in Mt. Province on May 27, while 6 to 25 mm of rain fell from May 28 to 29.

It said Mt. Province, as well as the rest of the Cordillera, would experience thunderstorms until the end of the week.

Because of the weather condition, the Department of Public Works and Highways will not rebuild the makeshift Nacagang detour bridge. A temporary detour bridge was put up after the bailey bridge across the Chico River was destroyed by a typhoon. —KARLSTON LAPNITEN