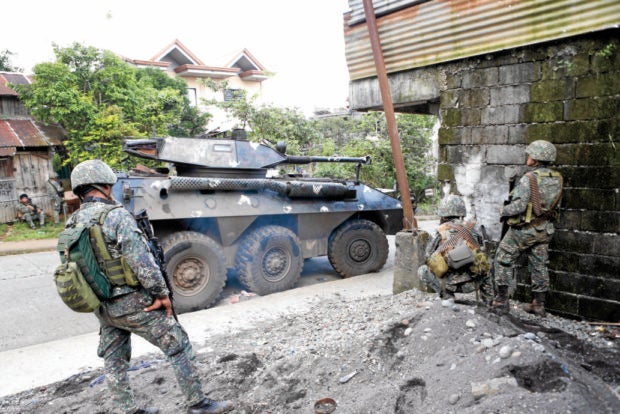 Members of the Philippine Marines conduct clearing operation to retake the city of Marawi from the control of Islamic militants on Sunday, May 28, 2017. At least one hundred six people have died in the ongoing fighting between government security forces. JEOFFREY MAITEM

Security forces have killed 89 Islamist militants during more than a week of fighting in Marawi City but the gunmen are still offering strong resistance and holding hostages, the military said Wednesday.

Attack helicopters fired rockets repeatedly on Wednesday morning into the pockets of Marawi where the militants were hiding among trapped residents, according to an AFP reporter who was following troops searching houses.

The clashes erupted on Tuesday last week when gunmen waving black flags of the Islamic State of Iraq and Syria (ISIS) group rampaged through the mostly Muslim-populated city in response to an effort by security forces to arrest a Filipino on the US government’s list of most-wanted terrorists.

That militant leader, Isnilon Hapilon, escaped but he was still believed to be in the city, military spokesman Brigadier-General Restituto Padilla said Wednesday.

Eighty-nine militants had been killed in the efforts to reclaim the city and find Hapilon, Padilla told reporters.

He said the military was making “very positive” progress towards ending the crisis, which had also seen 21 security forces and 19 civilians killed.

However Padilla acknowledged there were many residents still trapped in the 10 percent of the city that the gunmen were controlling, and that troops would likely meet increasingly strong resistance there.

“That 10 percent is most likely the area that is heavily guarded and defended by any armed men if they are protecting any individual of high value,” Padilla said.

Padilla said he did not know how many militants remained.

He said they had been reinforced by prisoners who escaped from two jails during the initial rampage, and “sympathizers” of the militants.

There were more than 2,000 residents still trapped in areas of Marawi held by the militants, Zia Alonto Adiong, spokesman for the provincial crisis management committee, told AFP.

The militants also took a priest and up to 14 other people hostage at the start of the crisis.

A video of the priest appeared on social media on Tuesday in which he repeated the militants’ demands to withdraw, and said the militants were holding 240 people hostage.

“The video may seem to be authentic,” Padilla said, although he cautioned military technology experts were still verifying it.

Padilla also emphasized the video was being used for propaganda, that the priest was speaking under duress and he did not know if the figure about the number of hostages was correct.

President Rodrigo Duterte declared martial law across the entire southern region of Mindanao, home to roughly 20 million people, in response to the crisis.

He said the Marawi violence showed that local militant groups were uniting behind IS and becoming a major security threat across Mindanao. CBB