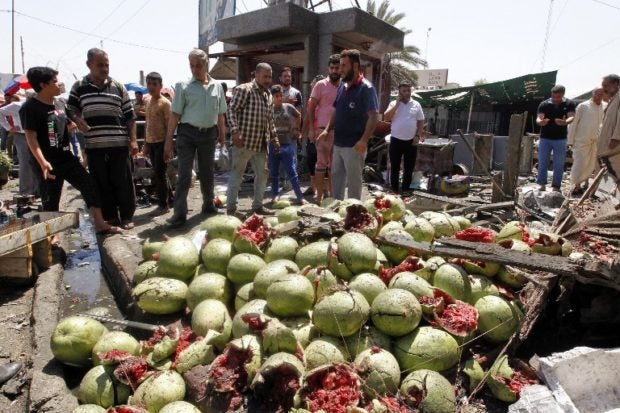 Iraqis gather at the site of a car bomb explosion near Baghdad’s Al-Shuhada Bridge on May 30, 2017, which killed at least five people and wounded 17, security and medical officials said. There was no immediate claim of responsibility for the attack but the Islamic State of Iraq and Syria (ISIS) group carries out frequent bombings targeting civilians in the Iraqi capital. The blast followed an overnight suicide bombing at a popular Baghdad ice cream shop that killed at least 21 people. AFP

BAGHDAD, Iraq — Three suicide bombings in Baghdad and a city to the west have killed at least 42 people, targeting Iraqis breaking their fast and elderly people collecting their pensions, officials said Tuesday.

The strikes came as forces fought to retake the last areas held by the Islamic State group in their former stronghold of Mosul.

The first IS-claimed car bombing struck a Baghdad ice cream shop during the Muslim holy month of Ramadan, when Iraqis often stay out late shopping or socializing after breaking their daily fast.

A second attack claimed by the group targeted the country’s main pension office, while a third bombing was carried out at an army checkpoint in Hit, some 120 miles (200 km) west of Baghdad.

Haidar Hussein, 22, had been sitting with friends at a coffee shop near the Al-Faqma ice cream parlor in the capital’s central Karrada district.

A police captain tried to prevent a small white pickup truck from approaching the area, but the driver kept going forward and then the truck exploded, he said.

The blast sent rubble flying, sparked a fire and threw Hussein to the ground, injuring his arm and leg. At least 16 people were killed and 75 injured in the attack.

After checking himself for wounds, Hussein began to look for his friends.

Among the dead was Hussein’s 22-year-old friend Karar, who left behind two wives and three children.

Images posted on social media showed the devastating impact of the attack, which left ice cream cups scattered on the blood-stained ground.

In the second strike, a suicide bomber blew up a vehicle near Iraq’s main pension office, which is close to one of the principal bridges over the River Tigris, said the Baghdad Operations Command.

The blast killed at least 11 people and wounded at least 40, officials said.

The bombing at the Hit checkpoint killed 15 people, including four soldiers and a journalist, while 23 others were injured, Anas al-Ani, spokesman for the department of health in Anbar province told AFP.

The Iraqi chain Asiasat TV said its journalist Souhaib al-Hiti had died in the attack, for which no group has yet claimed responsibility.

The US State Department said in a statement that it condemned the Baghdad bombings in “the strongest possible terms”.

“These brutal attacks, whose victims included innocent children breaking the Ramadan fast and elderly Iraqis collecting their pensions, demonstrate once again the wanton savagery of the enemy we face,” spokeswoman Heather Nauert said.

The UN called the bombings an “outrage” while Paris turned off the lights of the Eiffel Tower on Tuesday night in tribute to the victims.

The bombings in Baghdad come as Iraqi forces fight to retake the last IS-held areas of Mosul, a city that was the jihadist group’s emblematic stronghold.

Iraqi forces are more than seven months into a massive operation to recapture the city, and have already taken back its whole eastern side and much of the west.

Three neighborhoods north of Mosul’s Old City — Al-Shifaa, Al-Saha and Al-Zinjili — are now the target of a broad assault by Iraqi soldiers, police and special forces that was launched last week.

IS is mainly relying on “snipers and suicide bombers” to target Iraqi forces, as it is running low on mortar rounds and explosives after losing sites it previously used to produce them, Iraqi Brigadier General Shakir Kadhim Mohsen told AFP.

The United Nations has warned that up to 200,000 civilians who are believed to remain in IS-held areas of the city are in grave danger and that large numbers could flee.

“We are deeply concerned that right now, in the last final stages of the campaign to retake Mosul, that the civilians… in (IS) areas are probably at graver risk now than at any other stage of the campaign,” Lise Grande, the UN humanitarian coordinator for Iraq, told AFP.

The World Food Program said Tuesday that it “has identified worrying signs of an increase in the rate of malnutrition among newly displaced children from western Mosul.” CBB