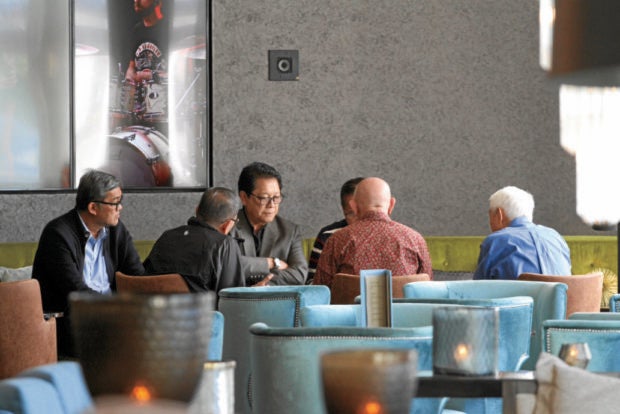 INFORMAL MEET Peace negotiators from the government huddle with those of the National Democratic Front of the Philippines to discuss ways of saving the fifth round of talks hours before formally announcing their withdrawal. —KARLOS MANLUPIG

NOORDWIJK, The Netherlands – Government and communist peace negotiators still hope the fifth round of talks could be salvaged and rescheduled immediately.

But both panels said the timing of the resumption would still depend on how the situation on the ground changes.

For now, the National Democratic Front of the Philippines (NDFP) is hoping unresolved issues will not escalate so that the peace process could move forward.

Negotiators also stressed the implementation of previous agreements is crucial, particularly the Joint Agreement on Safety and Immunity Guarantees (Jasig) and the Comprehensive Agreement on Respect for Human Rights and International Humanitarian Law (Carhrihl).

Presidential Adviser on the Peace Process Jesus Dureza said both the Jasig and Carhrihl remain in effect as did Fidel Agcaoili, chief negotiator of the NDFP.

“The GRP-NDFP peace negotiations are ongoing despite the fact that the fifth round of formal talks did not take place as scheduled due to the decision of the [government] panel not to participate,” Agcaoili said.

“All the bilateral agreements that lay down the framework, processes and conditions for the entire peace negotiations, including the Jasig, remain binding, operational and in effect,” Agcaoili added.

He said the government had also assured the rebels there would be no arrests while the talks were ongoing.

“The NDFP Negotiating Panel has received assurances from Silvestre Bello III, head of the GRP panel, that Jasig remains operative,” he said.

“This means that all the NDFP consultants who are involved in the ongoing peace negotiations are guaranteed (1) free and unhindered passage in all areas in the Philippines, and in traveling to and from the Philippines in connection with the performance of their duties in the negotiations; and (2) immunity from surveillance, harassment, search, arrest, detention, prosecution and interrogation or any other similar punitive actions due to any involvement or participation in the peace negotiations,” he explained.

The top NDFP negotiator said respecting Jasig was necessary in pursuing bilateral consultations between working groups which could then agree “to prepare for the eventual resumption of the formal talks.”

The talks, which were originally scheduled to begin on May 27 and to end on June 2, were put on hold after the government decided not to participate in the fifth round.

President Duterte declared martial law over the entire island of Mindanao after heavy fighting erupted between government forces and the so-called Maute group in Marawi City.

The Communist Party of the Philippines later issued a directive calling on the New People’s Army (NPA) to further intensify its offensives against government forces that are implementing martial law.

But the NDFP later explained the directive was not intended to undermine the negotiations but only as a response to the statement of National Defense Secretary Delfin Lorenzana that the NPA was included in the targets of martial law.

The government, through Bello, clarified that the NPA was not a target of martial law and that the current direction of the Duterte administration was to seek a political settlement with the communist movement.