ILIGAN CITY—The mayor of the northern Mindanao city of Iligan, which has been on edge since gun battles erupted between government forces and terrorist groups in nearby Marawi City last week, has ordered his armed constituents to shoot terrorists who would force their way into their homes.

Mayor Celso Regencia issued the order during a meeting on Monday with the city’s 44 village chiefs, saying armed residents should take action to protect their families and properties.

“I am issuing this order to residents of Iligan who legally possessed weapons, but please do not commit abuses such as bringing your weapons outside you homes. You can only use it once your life is in danger and the terrorists will enter your homes,” he said.

He did not say how residents could tell whether a person was a terrorist.

Many residents of Iligan, about 25 kilometers north of Marawi City, have been worried about the possible spillover
of the violence after the gun battles nearly emptied the predominantly Muslim city of its over 200,000 residents and prompted President Duterte to declare martial law in the whole of Mindanao.

Government troops backed by tanks, helicopter gunships and bombers, have been trying to dislodge gunmen from the Maute group and the Abu Sayyaf faction led by Isnilon Hapilon for the past seven days. The Maute group and Hapilon have pledged allegiance to Islamic State (IS). 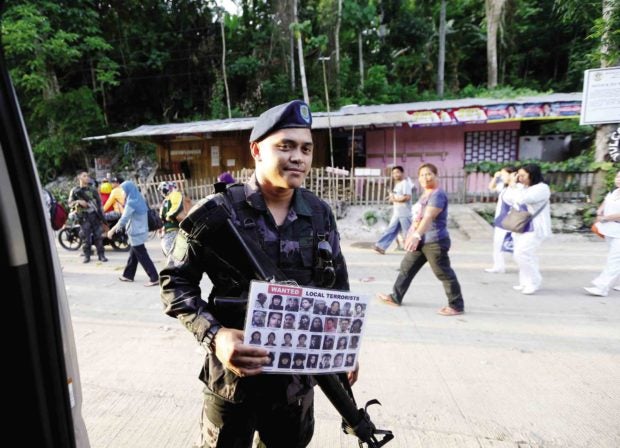 SECURITY CHECK A policeman holds a poster of wanted militants belonging to the Maute group as he mans a checkpoint set up along a road leading to Iligan City. Residents fleeing the clashes between government troops and militants in Marawi City are trooping to Iligan and nearby areas to ensure their safety. —AP

Regencia said government forces were not fighting Muslims but terrorists, who would kill indiscriminately.

He said information should be shared only with authorities for verification, not on social media or text messages.

Regencia said over 60,000 people had fled to his city from Marawi, but Leo Alicias of the Office of Civil Defense
in northern Mindanao has reported that authorities were having difficulty locating and documenting some refugees, especially those who had not sought shelter in evacuation centers here.

Alicias said they were coordinating with Marawi village officials to list down people who had fled the besieged city after clashes erupted there on May 23.

In Zamboanga City, Mayor Maria Isabelle Salazar maintained the no ID, no entry policy “to ensure the safety of everyone.” People wanting to enter the city “should be properly documented,” she said.

Salazar said there was no need to implement a curfew in her city, which experienced pitched gun battles during the three-week siege by followers of Moro rebel chief Nur Misuari in September 2013.

Zamboanga del Sur Gov. Antonio Cerilles said checkpoints had been established in the boundaries of his province and Lanao del Norte.

“Strong police visibility is observed in every corner and barangay officials are mandated to report new faces or visitors,” Cerilles said, adding that the province was not imposing any curfew.

In Sulu, Gov. Abdusakur Tan said “nothing has changed.”

“We are more preoccupied with the observance of Ramadan,” the Muslim holy month of fasting, he said.