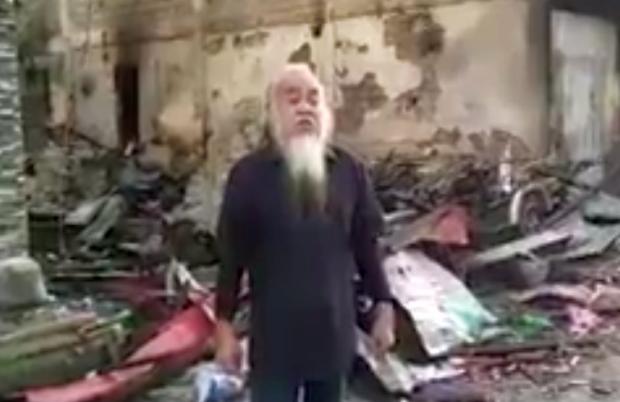 One of the hostages held by the Maute Group in Marawi City appealed to President Rodrigo Duterte to stop military operations as the battle with terrorists entered its eighth day on Tuesday.

“Mr. President, we are in the midst of war,” Fr. Teresito “Chito” Suganob said in a video that has been circulating on Facebook. “We are asking for your help. Please give us what your enemies are asking for. They are not asking for anything, just withdraw your forces away from Lanao del Sur and Marawi City. Stop the air strikes, stop the air attacks, stop the cannons.”

Whether the statement was made on his own free will or not could not be determined.

The Catholic Bishops Conference of the Philippines confirmed that the man on the video was indeed Suganob, the vicar general of Marawi City.

The priest was abducted at St. Mary’s Church last Wednesday, May 24, a day after the botched raid by the military on a hideout of Abu Sayyaf leader Isnilon Hapilon, which eventually led to the ongoing gunbattle.

Suganob said there were other 240 “prisoners of war” with them – including children, church workers, employees, and teachers.

“We do not ask for anything. We just ask you to leave this place peacefully,” Suganob said, standing in front of some destroyed buildings. Gunfire could also be heard while he was talking.

“Do not use violence, your enemies are ready to die for their religion,” he said.

More than 100 people have been killed in the fighting that started last Tuesday. It also led Duterte to declare martial law in the entire Mindanao. /atm