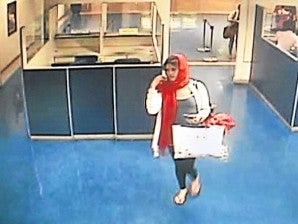 WOMAN IN RED VEIL An immigration officer positively identifies the woman recorded in a monitoring center at the Bureau of Immigration in Intramuros, Manila, as Maria Ramona Bautista, a suspect in the murder of her own brother, Ramgen Bautista. Ramona left for Hong Kong on Friday at the Ninoy Aquino International Airport Terminal 1.BI CCTV /RICHARD REYES

A production assistant of Ramgen Bautista on Monday said the rift between his slain employer and Ramon Joseph “RJ” Bautista, Ramgen’s  younger brother and a suspect in the murder, stemmed from a dispute over cars and allowance.

Ronaldo Angcajas said the conflict started when RJ, 18, sold his practically new Mitsubishi Strada for P800,000. The vehicle was often used by Ramgen, 23, who was killed on October 28 at the family residence in BF Homes Parañaque City.

Feeling shortchanged that the car was sold far below its actual value, Ramgen (Ram Revilla in show biz) reported the matter to their father, former Senator Ramon Revilla Sr., which in turn earned the ire of the younger brother.

Angcajas said Ramgen had asked RJ to buy back the car but it was too late.

The production assistant added that even if Ramgen had his own car, he often used the vehicle.

“From then on, they hardly talked to each other. RJ said Ram was meddling too much,” said Angcajas.

RJ used the money from the sale of the Strada to buy a new Mitsubishi Montero. By then, Revilla Sr. reportedly wanted to teach RJ a lesson by letting him pay for the down payment.

“At one point, [RJ’s] driver didn’t even get his salary of P8,000 because it was used for the monthly down payment,” Angcajas said.

He said RJ and Nilo Kawit, a driver of Ramona Bautista, sister of Ramgen and RJ, had warned him that the siblings’ quarrel had gotten into RJ and Ramona’s nerves.

“It was the root cause of the feud among the siblings,” said Angcajas.

At one point, Kawit told Angcajas in jest that his wards were “so angry” at the latter’s boss that they wanted to kill Ramgen.

Angcajas said this was the information he had long wanted to tell Senator Ramon “Bong” Revilla Jr., half brother of the Bautistas, but revealed it only now because he feared for his safety.

“I’m ready to stand by my statement for as long as I’m alive,” Angcajas told the Philippine Daily Inquirer.

He added that the conflict between Ram and RJ was worsened by the elder brother’s “role as budget manager” of the allowance for all nine siblings.

“Ram told me that he didn’t even want to handle the money but had to do it because he’s the eldest,” said Angcajas.

Manahan, 22, on Monday underwent a second operation to fix four facial fractures, according to the Parañaque City police.

Angcajas said the allowance “was reduced” when the debt of the siblings’ mother, Genelyn Magsaysay, had reached “over a million.” It was Revilla Sr. who footed the bill.

Angcajas’ statement will be included in the preliminary investigation at 2 p.m. Tuesday at the Parañaque City Prosecutor’s Office.

“Ronald [Angcajas] voluntarily gave that statement and we will include that as addendum to his previous statement,” said Sy.

Task Force Ramgen head Chief Inspector Enrique Sy said Angcajas, a close confidante of Ramgen, was described as someone who “knew everything about Ramgen’s day-to-day affairs.”

For this reason, Ramona pinpointed Angcajas as a murder suspect based on her prerecorded message in a TV interview before she left for Turkey via Hong Kong on Friday.

Investigators handling the probe of the murder may have been “outwitted” by  Ramona, who fled the country after being tagged as a principal suspect in the killing of her brother, Justice Secretary Leila de Lima said Monday.

Parrying criticisms of arbitrarily exercising her power to hold one’s travel abroad in the case of Ramona and former President Gloria Macapagal-Arroyo, De Lima said she should not be blamed for not immediately placing Ramona on the immigration bureau’s watch list.

“The problem in the Ramona case is that the police did not act fast enough as they apparently were outwitted,” De Lima said in a text message to the Inquirer.

De Lima, who had just returned from a meeting of justice ministers of member-nations of the Association of Southeast Asian Nations in Cambodia, said she did not receive any request from the Parañaque police to put Ramona on the watch list.

She argued that the circumstances behind her decision to defer action on Arroyo’s foreign trip should not be compared with that of Ramona’s.

Both criminal offenses are considered nonbailable and punishable by life imprisonment.

“The (judicial) process against Ramona has yet to start. She’s not yet a subject of preliminary investigation,” De Lima said in an interview over the radio.

“Neither the police nor the prosecutor asked me (to place her on the watch list) precisely because the preliminary investigation is yet to start,” she said.

De Lima said she was considering formally asking the Department of Foreign Affairs to cancel Ramona’s passport to facilitate her immediate return to the country.

“Cancellation of her passport is always an option,” the justice secretary said, adding:

“But I will ask first our legal staff to study and determine if that course of action is already ripe or warranted under the premises.”

She said such authority, as contained in Department Circular No. 41 issued by her predecessor, Alberto Agra, was critical “in situations where the courts have not yet acquired jurisdiction over criminal offenses.”

“The government cannot be rendered powerless in such situations where there’s already a real need to prevent a suspect/respondent from fleeing the country and, thus, be beyond the reach of the investigative processes,” De Lima said.

The National Bureau of Investigation (NBI), meanwhile, said the government must be extra careful in using diplomatic measures to force Ramona’s return from Istanbul, Turkey, where she was reportedly headed when she left the country last Friday night.

“We should place everything in order in this matter. Otherwise, our country may be put to shame in the international community,” Gatdula told the Inquirer over the phone.

He added: “We are a government of laws. We must respect the rule of law. Everybody has the right to travel.”

The government cannot request the Interpol to place Ramona on its “red notice list” pending the release of a court-issued arrest warrant against her, he said.

Gatdula, who just returned from an Interpol meeting in Vietnam, said only persons covered by arrest warrants for a criminal offense with a minimum of two-year imprisonment, could be put on the red notice list.

Asked if he had sought the Interpol’s help in locating Ramona, he said: “I still have to wait for Secretary De Lima’s formal written directive which I will attach to the letter I will send to my Interpol counterpart.”

“I cannot just request the Interpol because it’s not an ordinary police organization. We should observe some formalities,” Gatdula said.

Investigators are close to unmasking the identity of another suspect, alias “Brian,” the alleged contact of RJ in hiring gunmen Roy Francis Tolisora and Michael Jay Altea, according to Parañaque police chief, Senior Superintendent Billy Beltran.

The police are also set to correct the name of one the suspects, according to Beltran.

“We learned that Altea is really Nartea who already had a record in the BJMP (Bureau of Jail Management and Penology),” said Beltran.

Read Next
Bulacan town residents ask SC to strike down landfill project along Manila Bay
EDITORS' PICK
UK’s Boris Johnson will resign, BBC reports
Unemployment rate up to 6% in May
Geek out at TOYCON 2022 powered by Smart Signature
High inflation: Your P1 is now worth only 87 centavos
High-risk pregnancy: Reducing your risk is in your hands
House energy committee chair Arroyo bats for cheap electricity
MOST READ
Suspect in grisly killing of missing woman in Bulacan arrested
Kim Atienza’s daughter flaunts bikini body in response to critics of her ‘revealing photos’
Japanese artist who created ‘Yu-Gi-Oh!’ found dead in the sea
FDA probes popular Filipino noodle brand for ‘high level of ethylene oxide’
Don't miss out on the latest news and information.