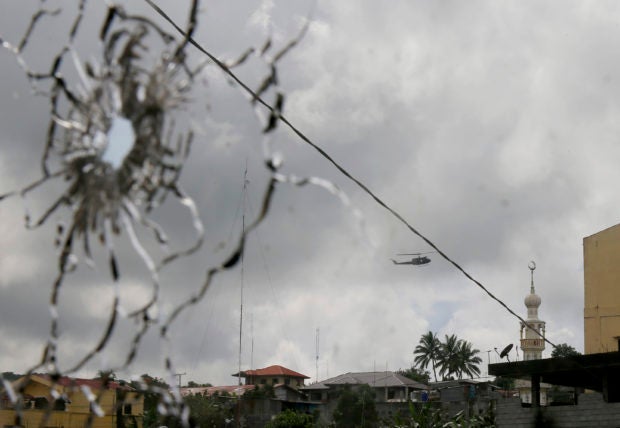 A military helicopter hovering by a mosque is seen through a shattered glass brought about by the fighting between government troops and Muslim militants who continue to hold their ground in some areas of Marawi city for almost a week Monday, May 29, 2017 in southern Philippines. Philippine forces control most of a southern city where militants linked to the Islamic State group launched a bloody siege nearly a week ago, authorities said Monday, as the army launched airstrikes and went house-to-house to crush areas of resistance. (AP Photo/Bullit Marquez)

ILIGAN CITY—Two Maranao women put their lives on the line to defend Christians when terrorists from the Maute group attacked Marawi City on Tuesday, prompting President Duterte to declare martial law in all of Mindanao.

Cris, a Bisaya (as Muslims and “lumad” [indigenous people] call non-Muslims) who lived with his family in Marawi, recalled that when a group of terrorists barged into the gun store in Basak Malutlut where he worked, “Ma’am Farida confronted them.”

“The confrontation was really eye to eye, which indicated the seriousness of the message and the personal resolve that Ma’am Farida was showing [to the gunmen],” Cris said.

The group’s leader ordered the guns and ammunition in the store hauled off and questioned Farida about her employees.

Farida stepped back to stand between her 13 male employees who were huddled together and the group of about 10 terrorists.

“You have to kill me first before you can even touch them!” Cris quoted Farida, speaking in the Maranao language, as telling the terrorists, mostly boys in their late teens.

Cris is one of Farida’s 17 employees who man her family’s two gun stores in Marawi, one in Basak Malutlut and another in Banggolo district, which was also looted.

At the start of the siege, 13 of the employees were in the Basak Malutlut store while four where in the Banggolo store.

Most of the 17 have been employed by Farida for more than a decade. Many live with their families at a compound in Basak Malutlut.

Had the terrorists seized them, their families would have been taken, too, Cris said.

Although official statistics show that non-Muslims account for just 1 percent of Marawi’s population, the actual proportion could be higher, as many Bisaya work and live in the city, mostly in commercial establishments and in the homes of well-off families.

These Bisaya have learned to speak Maranao and have assimilated well into the community.

The bulk of the non-Muslim population lives on the campus of Mindanao State University (MSU), designed as a social laboratory for cross-cultural interaction among the peoples of Mindanao, Sulu and Palawan.

Although without religious underpinnings, the Moro insurgency has created tensions between Muslims and Christians, especially in the conflict areas.

Decades of efforts at interfaith dialogue have contributed much to easing the situation. But the advent of Islamic radicalism has shaken anew these fragile relations.

The beheading of two sawmill workers by Maute terrorists in Butig town last year sent a chill through the Christian community in the city and caused unease even among Muslim employers.

Cris said he believed that because the gun store employees were not harmed, the terrorists might have been interested in their technical skills.

When the terrorists left, Farida ordered the employees to get their families and led them to a relative’s house in Bangon, 6 kilometers away, Cris said.

There they were fetched by Farida’s uncle and taken to the family home in Padian, near the lake, where they were joined by the four other employees from the Banggolo gun store.

The following day, they crossed the lake to Binidayan town and from there traveled to Iligan City.

At about 5 p.m. on Tuesday, as the terrorists took control of Marawi’s main districts, Zaynab, a development and humanitarian relief worker, was counting Christians who had taken refuge in the center.

The following day, she gathered 20 of them, several staffers and a family member, and put them in vehicles that took them to Iligan, traveling the long southern route through Malabang to avoid the gridlock on the Iligan-Marawi road.

They traveled for 15 hours—thrice the normal time of the ride to Iligan—skipping meals, which was risky for a diabetic like Zaynab.

“I never minded the danger. I was prepared to die first before they (terrorists) could harm the Christians,” she said.