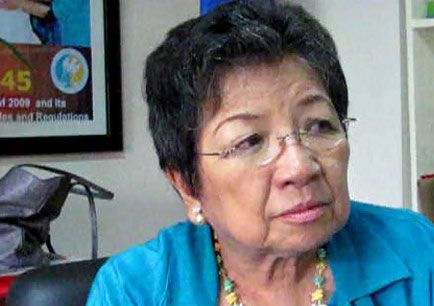 Former Commission on Human Rights chairperson Loretta Ann Rosales protested a “fake news” circulated in social media on Monday that made it appear she called for “care and compassion” for the Maute group terrorists who laid siege on Marawi City since last week.

“I am denouncing those responsible for spreading this malicious information saying I sympathize and take pity on the Maute group. This is fake and malicious news,” she said.

The former Anakbayan partylist representative was prompted to disown the quote attributed to her in the anonymously-created meme, since some netizens passed it on even as others promptly spotted it as fake.

The meme carried Rosales’ picture with the caption: “It is very unfair to the MAUTE GROUP, Duterte should not use airplanes walang kalaban laban yung mga MAUTE GROUP Kawawa naman sila, they should be treated with care, compassion and Dignity. – Etta Rosales, C.H.R.”

“I am no longer the CHR chairperson. I have always denounced terrorism and I denounce the actions of the Maute group against the people of Marawi,” Rosales stressed.

She however insisted that the President’s declaration of martial law in the entire Mindanao is not needed, since the military and police are capable of containing the rebels within Lanao del Sur province.

Rosales reprimanded the “troll” or netizens who deliberately spread false information to stop “wasting time and effort spreading lies” and instead support the humanitarian assistance to Marawi residents.

Rosales was appointed CHR chairperson by former president Benigno Aquino III on September 1, 2010. She stepped down at the end of her term on May 5, 2015.

She is part of a new group that opposes the return of the Marcoses to Malacañang.