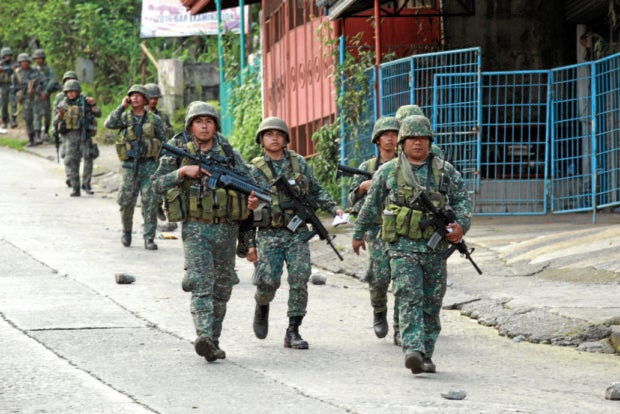 Members of the Philippine Marines conduct clearing operation to retake the city of Marawi in he southern Philippines from the control of Islamic militants on Sunday, May 28, 2017. At least one hundred six people have died in the ongoing fighting between government security forces. PHOTO BY JEOFFREY MAITEM

MANILA — It was not a “botched raid,” but it was a raid that aborted the razing of a city.

This was how the Armed Forces of the Philippines (AFP) defended their operation to capture alleged local ISIS leader Isnilon Hapilon in Marawi last May 22, which has since led to an ongoing siege of the city by the ISIS-allegiant Maute group.

In a statement on Monday, AFP Chief of Staff General Eduardo Año revealed that “the Maute-ISIS Group planned to set ablaze the entire city of Marawi within the time of the month of Ramadan.”

This information, according to the military, was obtained from a “very reliable source” in the ongoing operations in Marawi.

Año explained that their operation began with a surprise raid of Hapilon’s safehouse in Barangay Basak Malutlut in Marawi, which the military chief claimed caught the guards from the Maute group by surprise.

“The grand plan to burn down the entire city of Marawi in the ensuing two weeks was unsettled by that raid,” Col. Edgard Arevalo, the AFP Public Affairs Office chief, claimed, in the same statement. “What others termed to be a ‘botched raid’ turned out to be an ‘abortive raid’ that prevented what could have been carnage of an Islamic City in two weeks,” Arevalo said.

“This explains why at the time of the raid, the terrorist group was able to pull out – almost instantaneously and simultaneously – counter actions in various locations in the city to distract the focus of the raid,” Arevalo added.

After one week of fighting, the military said the Maute group has already suffered 61 fatalities as of Monday—although only 42 bodies had been accounted for. The rest were based on eyewitness accounts. The military has lost 15 soldiers in the fight. The count of civilians allegedly killed by the Maute group remained at 19, as of

Security forces have so far rescued 390 civilians trapped in the city.

Under the circumstances, the AFP sees “positive progress” in their operations in Marawi, lauding the coordination of the Philippine National Police’ (PNP) Special Action Force.

“It is a challenge for us to prevent enemy reinforcements from coming to the city as they may also disguise themselves as civilians. At the same time, we have intensified our checkpoint operations to check the possibility of Maute-ISIS  members who may escape by blending in with the evacuees,”Arevalo said.

In a press briefing on Monday, PNP Director General Ronald “Bato” Dela Rosa admitted that the Maute group was “fluid,” moving swiftly from one building to another. “It’s really difficult to clear built-up areas, in close-quarter battle. You have to be on guard for a lot, watch out in both the horizontal and vertical environment. That’s why even if there are only a few members, if they move around, you would think there were many of them,” Dela Rosa said, in Filipino.

While admitting the Maute group seemed to have “prepared,” “they are still human. They will get tired, and run out of bullets,” the PNP chief said, as reassurance.

Meanwhile, the AFP reiterated their assurance that their airstrikes have been targeting only verified enemy positions in Marawi, and have only been used “when necessary” for support. The military claimed there were only “pockets of resistance” in the city, as of Monday.

“We are using precision ammunition in our surgical airstrikes. This  means that we have well-identified targets and we have highly skilled and trained pilots delivering the payload to our targets,” Arevalo
aid.

Meanwhile, Arevalo appealed to the public to be careful what they post on social media about the conflict. “The Maute group is utilizing the social media to gain attention and support from international terror groups. The people are unwittingly supporting this agenda when they share and post photos and videos in social media,” Arevalo said. Too, he urged netizens to refrain from posting about movements of government security forces as this might compromise the operations and endanger state security forces.  SFM