‘Ombudsman has last say on Napoles’ tell-all on pork scam’ 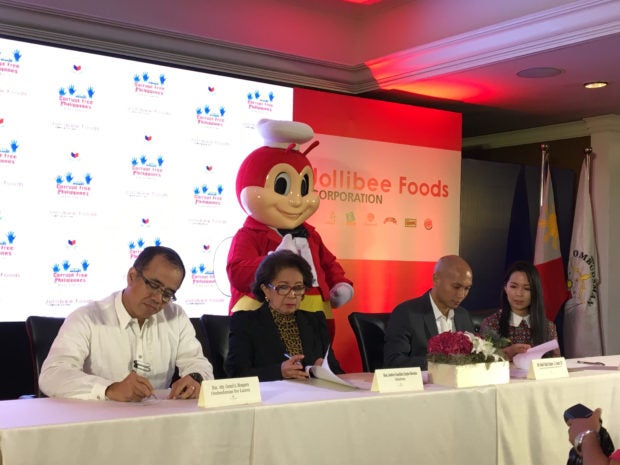 Ombudsman Conchita Carpio Morales leads the launching of the “Corrupt-Free Philippines” Video Contest on May 29, 2017. At the sidelines of the event, Morales said Janet Lim Napoles, the accused pork barrel scam operator, could implicate three senators in the plunder but the Office of the Ombudsman would still have the last say on the value of her testimony (PHOTO BY VINCE NONATO / INQUIRER)

MANILA — The Department of Justice is free to let accused pork barrel scam mastermind Janet Lim-Napoles to implicate three minority senators, but the Office of the Ombudsman has stressed that it still has the last say on the value of her testimony.

At the same time, Ombudsman Conchita Carpio Morales said “it has no bearing” on the cases already pending against other legislators  accused of diverting their Priority Development Assistance Fund allocations. Morales was referring to the plunder and graft cases against former senators Juan Ponce Enrile, Jinggoy Estrada and Ramon “Bong” Revilla.

“She’s at liberty to press any charge against anybody,” Ombudsman Conchita Carpio Morales said in a short interview at the sidelines of the launch of the Corrupt-Free Philippines Video Contest on Monday.

“Probably, she forged an agreement with them that she’s going to come up with an affidavit, a notarized statement,” she said. “Nothing can prevent the DoJ from talking to the principal suspect because they believe that she has a bombshell.”

But as the anti-corruption agency with jurisdiction over government officials, Morales said her office would still be the one to decide on the DoJ’s conclusions.

“Since these are high-profile officials, if they [the DoJ] have to conclude at all their findings, their findings will come to us,” she said.

Morales added that it would also be a “fallacy” to consider Napoles a state witness at this point because her office would also get to decide that.

“Even if she gives a testimony against all persons in the world, it’s still the Ombudsman who will determine if she can qualify as a witness against those who have not been indicted in court,” Morales said.

At the same time, Morales disclosed: “There was an attempt to ask me before to meet with Napoles, but what for? There are investigators who can talk to her.”

This comes almost four years after the controversy first erupted and the Aquino administration was hounded by accusations of “selective justice.”  SFM/rga