North Korea launched ballistic missile into Sea of Japan — US 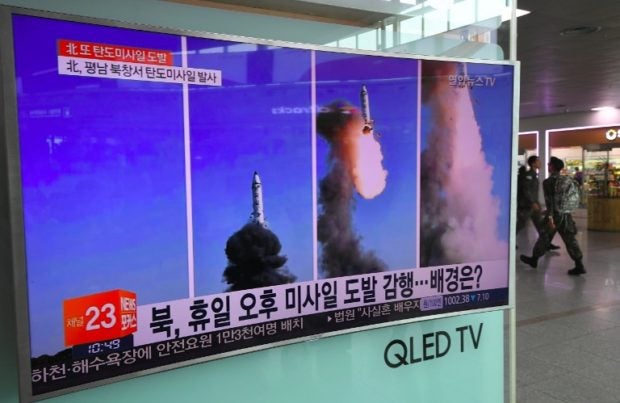 People walk past a television showing a news report on North Korea’s missile test of a Pukguksong-2, at a railway station in Seoul on May 22, 2017. The US said on Sunday, May 28, 2017, that the North again test-launched another ballistic missile  that landed in the Sea of Japan. AFP

The US Pacific Command said the short-range missile, launched from near Wonsan Airfield, was tracked for six minutes until it landed in the Sea of Japan.

It was not deemed a threat to North America. The command said it was working on a more detailed assessment of the missile launch.

“We continue to monitor North Korea’s actions closely,” PACOM said in a statement.

“US Pacific Command stands behind our ironclad commitment to the security of our allies in the Republic of Korea and Japan,” it added.

News of the launch comes as US President Donald Trump seeks tougher sanctions against Pyongyang’s isolated nuclear-armed regime, which is on a quest to develop a missile capable of reaching the continental United States.

North Korea has carried out two atomic tests and dozens of rocket firings since the start of last year. CBB