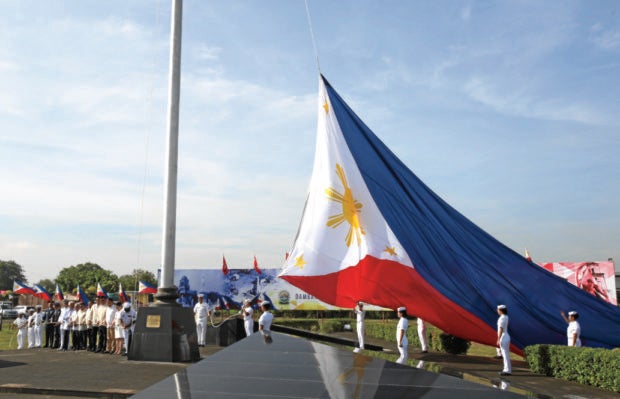 Government officials raise the National colors during the commemoration of the 119th National Flag at Heritage Park Barangay Alapan ll-B, Imus City, Cavite province. The occasion marks the first use of the Philippine flag after the victory in the Battle of Alapan.
INQUIRER PHOTO / NINO JESUS ORBETA

BAGUIO CITY—Fake news and deceitful allies are not modern phenomena. These were problems faced by leaders of the 1896 Revolution, according to the great-grandson of the first Philippine President, Emilio Aguinaldo.

“History repeats itself in so many ways,” Emilio Aguinaldo Suntay III said, citing as an example the false information fed to the media by the US government that presented Filipinos as savages who needed American guidance to justify their colonization at the turn of the 20th century.

“The Americans had designs on the country and had acquired the Philippines from Spain because of its gold and strategic location,” said Suntay, administrator of the interactive Gen. Emilio Aguinaldo Museum here.

Anti-imperialist Americans like writer Mark Twain opposed the subjugation of the Philippines and countered the American “yellow press” with their own editorials and news reports, he said.

Suntay also reflected on the “naiveté” of Filipino leaders like Aguinaldo, who allied with the US government to defeat Spain during the Philippine Revolution.

But the United States had already bought the Philippines from Spain and staged a “mock battle of Manila Bay” to hide the deceit, he said.

Aguinaldo may have realized he was being duped but did not know how to respond to the Americans, being “less a politician like Andres Bonifacio and more astute as a military tactician,” Suntay said.

Suntay spoke to Baguio officials as he toured them through the Aguinaldo museum on Sunday, National Flag Day.

He is the grandson of Aguinaldo’s daughter Cristina, to whom the late general bequeathed what is arguably the original Philippine flag that was raised in Kawit, Cavite, as well as the Palanan (Isabela) battle flag, which was kept in a bank vault for decades.

These flags are on display in a temperature-controlled room in the museum.

In 2015 and 2016, Suntay urged young Filipinos to rally behind the first flag as an expression of patriotism given the impact of Chinese incursions in Philippine territory in the West Philippine Sea.

On Sunday, he said Filipinos should study and be inspired by the military tactics and skills used by the revolutionary leaders.

According to him, people have been more preoccupied with the feud among the leaders as portrayed in movies, forgetting that the same leaders also agreed to unite under one military to fight Spain after the revolution broke in 1896.

The 1897 Tejeros Convention in Cavite province was a military assembly and the participating Magdiwang group, led by Bonifacio, and the Magdalo group, led by Aguinaldo, “were never really rival factions,” Suntay said.

“They just had different territories which faced a mighty Spanish military machinery so they had to organize into a single army,” he said.

According to him, the Tejeros Convention established the shift of the revolution from a political campaign waged by Bonifacio and Dr. Jose Rizal to a military campaign led by Aguinaldo.

Suntay also said the 1899 Battle of Tirad Pass, where the young general Gregorio del Pilar was killed, was described as a military failure during the Philippine-American war.

But he said the present generation “should see it as our version of ‘300.’”

Suntay was referring to the 300 Spartans who died while protecting a mountain pass against the invading Persian army in 480 B.C.