Hospital in Marawi not taken over by Maute — medical center chief 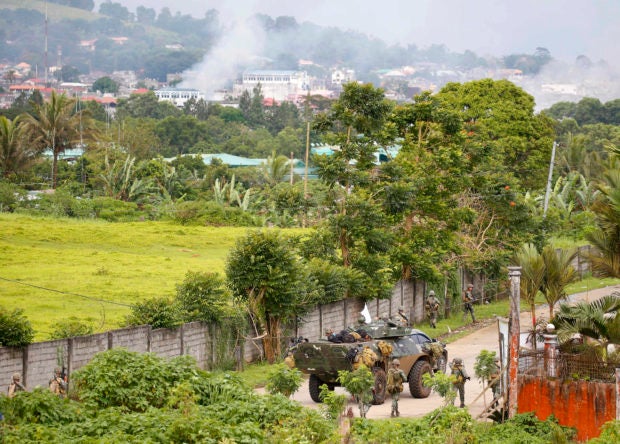 Fire rages at the suspected Muslim militant positions following airstrikes by helicopter gunships as Philippine marines walk to the frontline in the continuing assaults to retake control of some areas of Marawi city Sunday, May 28, 2017 in southern Philippines. Philippine forces launched fresh airstrikes Sunday to drive out militants linked to the Islamic State group after days of fighting left corpses in the streets and hundreds of civilians begging for rescue from a besieged southern city. (AP Photo/Bullit Marquez)

ILIGAN CITY – Contrary to earlier reports, the Amai Pakpak Medical Center (APMC) in Marawi was not taken over by the Maute Group, according to its chief of hospital, Dr. Amer Saber.

Saber, however, confirmed that a number of Maute fighters came to the hospital and brought in an injured comrade at the start of the firefight on Tuesday afternoon.

He said two armed insurgents entered the facility and asked them if they can bring in a patient for treatment. Their companions, four or five of them who were also armed, stayed outside the hospital gate and kept watch.

The patient did not survive since he was already in critical condition when he was admitted.

Around the same time, a police car arrived at the hospital premises. One of the police officers aboard the vehicle was Senior Inspector Freddie Solar, the intelligence unit chief of the Marawi City Police.

Saber said Solar brought his wife to APMC as she was suffering from appendicitis.

The policemen were taken hostage by the Maute fighters who were outside the APMC gates.

Of the police officers who were held at gunpoint, only Solar was shot. He was then brought inside the APMC but died shortly due to loss of blood, Saber said.

Before the skirmishes escalated, Saber said he ordered some of the hospital staff to move out of Marawi, for their safety.

Even at the height of bombings and clashes last Friday, Saber said the APMC was spared from destruction.

Saber said the APMC is ready for any emergencies and they are expecting more patients when the military will conduct mapping and clearing operations.

He said the hospital is equipped and its doctors are highly trained to perform surgeries and other medical procedures. JE/rga

Read Next
Palace to appoint Maranao spox to address Marawi City fighting
EDITORS' PICK
Heads may roll at BOC, says Palace if sugar smugglers are allowed to use recycled import permits
DOH reports increase in daily COVID-19 deaths, mostly unvaxxed
vivo brings to the Philippines a powerful smartphone with a slimmer body, the vivo Y02s for only PHP 6,499
House energy committee chair Arroyo bats for cheap electricity
Palace: Biggest supermarkets in PH commit to sell sugar at P70 per kilo
What to watch out for when selecting a video surveillance solution
MOST READ
DepEd to give teachers P5K cash allowance within first week of classes
Peso loses ground vs US dollar
DOJ indicts bank officer in $2.1 billion Wirecard fiasco
Mayor bares issues vs closed QC school
Don't miss out on the latest news and information.