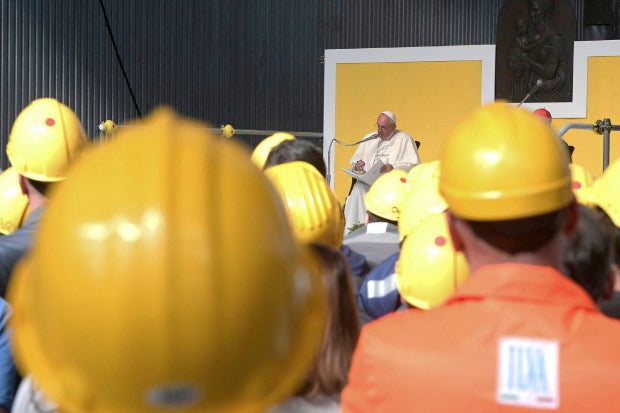 Pope Francis speaks at the ILVA steel-making company in Genoa, Italy, Saturday, May 27, 2017. Pope Francis has begun a one-day visit to the northern Italian port city of Genoa to meet with workers, poor and homeless people, refugees and prisoners AP

GENOA, Italy — Pope Francis highlighted the struggles that workers face in a globalized economy with a visit Saturday to a troubled steel factory in Genoa, where he stressed how jobs give people a sense of human dignity and denounced those who exploit workers.

The visit put a focus on the plight of those whose lives have been made precarious by years of economic crisis, including in Italy where a high jobless rate, especially among young adults, has driven many to leave the country.

Speaking to 3,500 industrial workers, many in uniforms or hard hats, Francis distinguished what he called the “real entrepreneur,” a person who “shares the labors of workers and shares the joys of work” to create something together, from speculators who are not bothered when they fire workers in search of profits.

“One sickness of the economy is the gradual transformation of entrepreneurs into speculators,” the pontiff said.  “The speculator doesn’t love his business, doesn’t love the workers, but only sees the business and workers as the means to make profit.”

He decried a political system that “sometimes seems to encourage” speculators, “not those who invest and believe in work.”

Francis also denounced those who claim that workers do their jobs only for the money, saying that “denies the dignity of work.”

It is by working that “our humanity flourishes,” he argued.

He listened to workers express their fears, including about technological transformations that threaten to leave many more without work in the future. He told them people must not resign themselves to “an ideology taking root everywhere that images a world where only half or maybe two-thirds of the workers will work and the others will be maintained by a social check.”

Francis, an Argentine whose parents left Italy in the early 20th century, also referred to his personal feelings aroused by visiting the port city, the departure point in the past for Italians seeking new lives in North and South America.

“It’s the first time I come to Genoa. And being so close to the port reminds me of where my father departed from,” he said. “This gives me a great emotion.”

The pontiff’s day also include lunch with homeless people, refugees and prisoners and a Mass before a crowd estimated at 80,000 people. CBB/rga