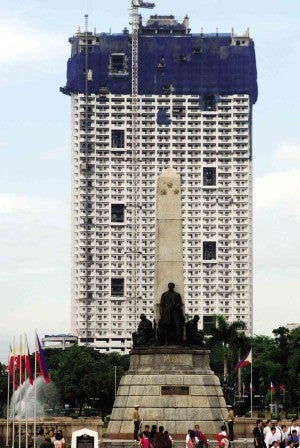 The Supreme Court has lifted its temporary restraining order against the controversial Torre de Manila apartment block on Taft Avenue in Manila because it has so far not violated any law.

The high court also found no proof that the project “is contrary to morals, customs and public order or that it brings harm, danger or hazard to the community.”

“There is one fact that is crystal clear in this case. There is no law prohibiting the construction of Torre de Manila due to its effect on the background ‘view, vista, sightline or setting’ of the Rizal Monument,” the court ruled.

The high tribunal stopped the construction of the 49-floor apartment block in June 2015 after the Order of the Knights of Rizal complained that it “mars” the sightline of the Jose Rizal monument at Luneta.

But the court examined Manila’s Ordinance No. 8119, or the city’s zoning ordinance, and noted that it only served as guidelines in the development of historic sites and facilities.

Also, the high court said Republic Act No. 10066, or the National Cultural Heritage Act of 2009, does not mention if another project, building or property may be the subject of a cease-and-desist order when it adversely affects the background view, vista or sightline of a heritage property.

Moreover, the court noted that the complainant also conceived of a similar idea in the 1950s when it proposed to build a theater, 29.25 meters high and 286 meters from the monument.

However, several sectors objected to the plan since the theater, among the other proposed buildings, would dwarf the monument.

In 2013, the Knights of Rizal again suggested building a Rizal Center in the park, which was disapproved by the National Historical Commission of the Philippines and the Department of Tourism.

“Thus, the Knights of Rizal, having earlier proposed a national theater a mere 286 meters from the back of the Rizal Monument that would have dwarfed it, comes to this court with unclean hands,” it said.

The Supreme Court stressed that “one who seeks equity and justice must come to court with clean hands.”

The court added: “[The Knights of Rizal] is now precluded from seeking any equitable refuge from the court. The petition should be dismissed on this ground alone.”

“Thus there is no justification at all for this court to exercise its extraordinary certiorari power,” the decision read.

Neither was the city government remiss in its duties under Ordinance No. 8119 because the developer applied for permits, approvals and licenses before the construction began.

“Even the Knights of Rizal could not point to any law that the City of Manila had violated and could only point to declarations of policies by the National Historical Commission of the Philippines and the Venice Charter, which do not constitute clear legal bases for the issuance of a writ of mandamus,” the court pointed out.

The decision was penned by Associate Justice Antonio Carpio and was promulgated last April 25.