Clinton daughter, others slam rape joke: ‘Not funny. Ever’ 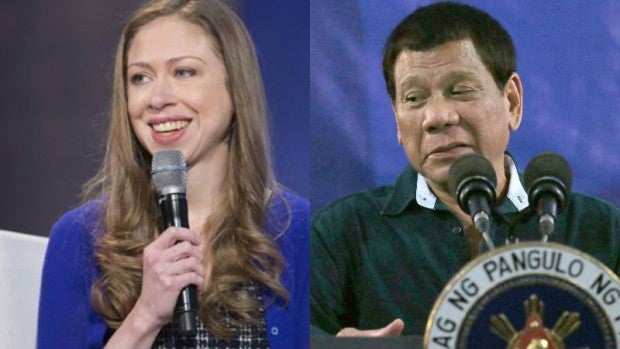 President Rodrigo Duterte has made another rape joke and got slammed for it by women’s rights defenders and the daughter of former US President Bill Clinton and former Secretary of State Hillary Clinton.

“Not funny. Ever,” Chelsea Clinton first said on Twitter on Friday, responding to a tweet about Mr. Duterte’s joke by The New York Times’ chief White House correspondent Peter Baker.

“Duterte is a murderous thug with no regard for human rights. It’s important to keep pointing that out & that rape is never a joke,” she later tweeted in response to another tweet.

The President cracked the joke on Friday in a morale-boosting speech to soldiers in Iligan City, about 25 kilometers north of Marawi City, where he had declared martial law to deal with Islamic State-inspired Abu Sayyaf and Maute Group terrorists who besieged the predominantly Muslim city earlier in the week.

Mr. Duterte, who often peppers his statements with man-on-the-street curses, assured the troops he would take responsibility for their actions in implementing martial law.

“If you had raped three, I will admit it, that’s on me,” he added

He said the President was taking decisive action and was speaking “with heightened bravado.”

“Again, rape is not a joke. Rape is a crime,” Hontiveros said on Twitter.  “Rape is a violation of the bill of rights which is not suspended by martial law.”

In a statement, Tanggol Bayi, a group of women’s rights defenders, said, “Rape is a heinous crime, never a laughing matter. Rape by state security forces is even worse.”

“While we continue to stand against groups that inflict terror on the people of Marawi, we stand against any form of human rights violations by the state … emboldened by Duterte’s martial law declaration in Mindanao,” it said.

It was not the first time that Mr. Duterte has made a joke about rape.

He caused outrage during the election campaign last year when he recalled a 1989 prison riot where inmates had lined up to rape an Australian missionary who was later killed.

In what was intended as a joke, Duterte said the victim was “beautiful” and as mayor of Davao City then, he should have been “first” in line.

He later apologized and said he had not intended to disrespect women or rape victims.

Duterte is known for his informal, no-nonsense style and his speeches are often loaded with profanity, threats and jokes about taboo subjects, which offend some, but are taken lightly by many Filipinos, especially his supporters.

In a radio interview on Saturday, Sen. Vicente “Tito” Sotto III, who said he was told of the President’s speech, tried to explain that Mr. Duterte was sending a warning to soldiers to behave.

“He was telling them to be careful. That was what I was told. I did not hear it exactly. I was just told about it. It was like ‘If you rape somebody, it’s like I did it myself,’” he said.

Sotto said rape was really a sensitive matter which was why the President was receiving flak for his joke.

However, there were people who couldn’t take jokes, he said.

Read Next
Last 7 of 11 Malabon ‘hulidap’ cops surrender
EDITORS' PICK
Ahead of ONE: Full Blast II, Mongkolpetch warns Elias Mahmoudi: ‘Watch out for my fists’
Synology NAS: A photo storage and multimedia server for your home
DILG takes over Cotabato town as all officials go on quarantine
Local gov’ts may start COVID-19 vaccination of poor residents using excess supply
Tighter curbs sought in provincial COVID-19 hot spots
Alex Eala wins Grand Slam on Independence Day: ‘I hope I made my contribution to the country’
MOST READ
‘Hindi pwedeng take 2,’ Sotto tells presidential, VP aspirants
Lacson: Kind-hearted Leni ‘in it to win’ presidency in 2022, but…
Calida’s ‘mental calisthenics’
NCR Plus remains under GCQ from June 16-30
Don't miss out on the latest news and information.