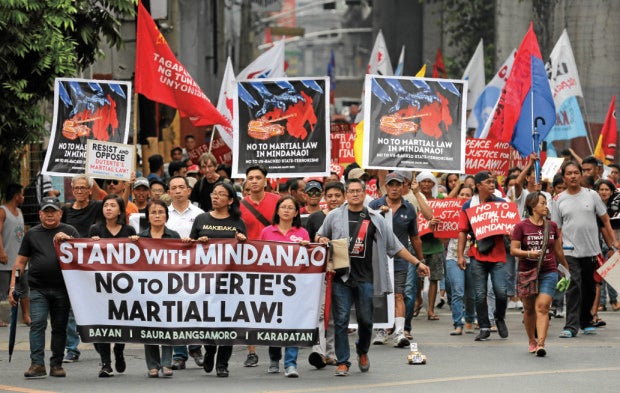 The declaration of martial law and the suspension of the writ of habeas corpus continued to alarm local and foreign groups that fear increased rights abuses.

The leftist group Karapatan belittled assurances from security forces that they will observe the law in implementing martial law in Mindanao.

“We cannot be assured by the guidelines released by the Department of National Defense and Philippine National Police on the implementation of martial law simply because they themselves are the violators of people’s civil and political rights,” Karapatan Secretary General Cristina Palabay said in a statement.

On Thursday alone, Karapatan said participants of the Ecumenical Women’s Forum in Sultan Kudarat were allegedly interrogated for an hour by the 6th Marine Battalion Landing Team in Palimbang town.

In Davao City, some 250 people were detained for not having proper identification papers for “verification processes.”

“Such incidents are already a prelude to more abuses,” Palabay said.

From July 2016 to April 30, Karapatan has documented 55 cases of extrajudicial killings, 101 incidents of illegal arrest and detention, and 30,904 cases of threat, harassment and intimidation in line with counter-insurgency operations.

The National Council of Churches in the Philippines also expressed concern over President Duterte’s declaration, saying it has a “chilling effect” on Filipinos.

“The sudden declaration of Martial Law is bound to make matters worse. it will also make the civilians more vulnerable,” the group said.

The NCCP urged the President to lift it “at the soonest possible time and address the issues that gave rise to this conflict, not through an all out war but through peaceful means.”

The Catholic Bishops Conference of the Philippines also appealed to the government to carefully study supposed plans to expand martial law to the rest of the country.

“Expanding it to Luzon and the Visayas is a crucial decision,” said Fr. Jerome Secillano, executive secretary of the CBCP’s Permanent Committee on Public Affairs.

At the same time, the New York-based Human Rights Watch said martial law could give rise to abuses that could rival the Duterte administration’s war against drugs.