Life in prison for ‘demon’ who kept kids as sex slaves 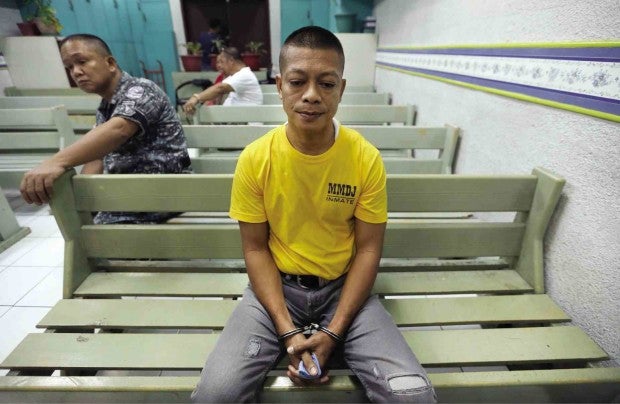 Jerrie Rodriguez Arraz remains “proud” and shows no sign of remorse despite being found guilty by a Quezon City judge on Friday.—LYN RILLON

Called a “demon” by the police for the things he forced his victims to do, a 44-year-old man was sent to a lifetime in prison by a Quezon City court on Friday for multiple counts of human trafficking, cybercrime and rape.

Jerrie Rodriguez Arraz, who still considered himself a benefactor and showed no sign of remorse even on judgment day, was found guilty by Judge Editha Miña-Aguba of the Quezon City Regional Trial Court-Branch 100 for abuses committed on several young women and a boy.

Arraz was convicted of human trafficking on two counts, each carrying a penalty of life imprisonment for each count; and rape on three counts, which added 89 years. A third charge
—running a cyberporn operation—also put him behind bars for nine years.

While he had many victims, the cases heard in the QC-RTC stemmed from only one complainant—his former house maid. The court ordered him to pay her a total of P1.8 million in exemplary and moral damages.

“We’re seeing that [these kinds of cases] are an emerging threat and a growing trend that we obviously need to address,” he told the Inquirer.

“Hopefully, this will send a strong message to people involved in these really horrendous and really evil activities that the arm of the law is not too short to reach them,” added Catedral.

Shortly after the promulgation, the lawyer received a text message—“Thank you so much”—from his client, who had already returned to her home province.

According to the case records, Arraz hired the complainant in March 2014 to be his domestic helper at his Barangay Commonwealth residence. Four years earlier, Arraz also convinced her impoverished family in Surigao del Sur to let her younger sister—then aged 12—live with him in Quezon City, promising to finance the girl’s studies.

The complainant expected that her work would only involve household chores and looking after the “six children” who were living with Arraz at the time, including her own sibling.

But things started taking a sinister turn weeks after she arrived.

“Arraz would wake her up early in the morning for a live sex show, where he would force her to have sex with him in front of a computer, with foreigners who are his customers [watching],” said Catedral, who also worked with the International Justice Mission.

Along with her sister and the other children, the housemaid would be taken to different hotels and forced by Arraz to have sex with foreign clients—Americans, Norwegians, Australians.

In October 2014, or after seven months of torment, she managed to escape and reported her ordeal to the Women and Children Protection Unit of the Philippine National Police.

By then she was four months pregnant, unsure of the child’s father due to her having multiple sexual partners.

On Nov. 14, 2014, an entrapment operation by the PNP, US Homeland Security, and the Department of Social Welfare and Development led to the arrest of Arraz in a Pasay hotel.

The abused children were rescued and a search on Arraz’s house found sex toys, condoms, lubricants, women’s undergarments, lewd pictures, along with the computers and gadgets he used for cyberporn.

Police and prosecutors later established that Arraz lured his victims from the provinces with promises of employment, only to turn them into sex slaves once they are in the capital.

In an earlier news report on the case, Director Benjamin Magalong, then the chief of the PNP-Criminal Investigation and Detection Group, remarked: “This is one man we can really call a demon.”

According to his testimony, Arraz was a commerce graduate who worked as a “freelance tourist guide” from 2006 up to his arrest in 2014. Earlier reports described him as a former overseas contract worker.

He appeared calm and was even smiling after Judge Miña-Aguba’s decision was read to him on Friday.

In an interview, the convict said he accepted the court’s decision, but pointed out: “It was my joy to help them … I enabled them to attend school. I gave them a home.”

“Now they want to take everything from me. But it’s OK,” he said, adding he would file an appeal soon. “I’m so proud of myself; I did everything to make myself happy, to help people.”

“I’m proud to face everything.”