Montana election down to wire after Republican ‘bodyslam’ 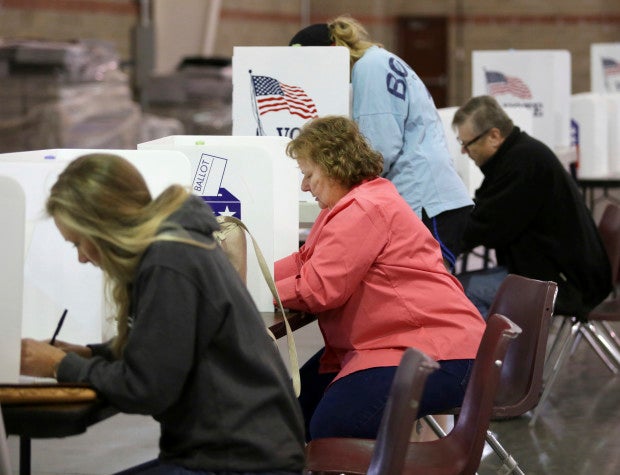 People fill out ballots for the special election to fill Montana’s only U.S. House seat at the Montana Pavilion at MetraPark on Thursday, May 25, 2017, in Billings, Montana. The seat was vacated by Ryan Zinke, a Republican who is now President Donald Trump’s Interior secretary. (Bronte Wittpenn/The Billings Gazette via AP)

A special congressional election in Montana—considered a bellwether in the opening months of Donald Trump’s presidency—was on a razor’s edge Thursday after the Republican candidate faced accusations he assaulted a journalist.

Greg Gianforte—a wealthy businessman who had been expected to comfortably win Thursday’s contest until recent weeks—faces up to six months in county jail and a $500 fine if convicted of misdemeanor assault against a journalist from the British newspaper The Guardian.

The race was already under close monitoring by Republicans concerned about possible cracks in support for Trump during his early, crisis-ridden tenure.

The Wednesday clash, caught on an audio recording, has mushroomed into a major headache for Trump’s party as Montanans troop to the polls to replace a Republican who vacated the seat to join the president’s cabinet.

Should Gianforte’s rival—69-year-old cowboy-poet Rob Quist—prevail, it would mark the Democrats’ reclamation of a seat that has been in safe Republican hands for 20 years, and the opposition party’s maiden congressional victory of the Trump era.

If Gianforte wins, Republicans will find themselves with an incoming member of Congress forced to appear in county court in coming weeks—a predicament Democrats will no doubt exploit as an example of the GOP’s decay.

“I think he should apologize,” House Speaker Paul Ryan said when asked about Gianforte’s confrontation with reporter Ben Jacobs, who says he was “body-slammed,” or violently thrown to the ground.

“That is wrong and should not have happened,” he added.

But he declined to say whether Gianforte would be welcome in Congress should he win.

“I’m going to let the people of Montana decide who they want as their representative,” he said. “That’s not our choice.”

By the time polls closed, at 8 pm (0200 GMT Friday), it remained unclear just how the fracas might alter the race.

The state’s three main newspapers rescinded their endorsements of Gianforte, but a majority of voters had already cast absentee ballots before the altercation, local media reported.

Democrats on the streets of Missoula expressed outrage.

“It is a little shocking to learn that someone who is trying to be our leader behaves in that way,” Montana voter Rachel Pauli, 27, said as she waved anti-Gianforte signs on a bridge over the Clark Fork river. JPV