Manila march to rage vs ‘nightmare’ in South 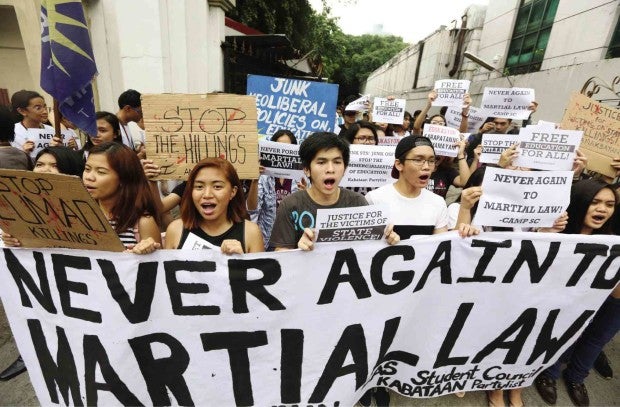 EARLY OUTCRY With President Duterte’s declaration of martial law in Mindanao, militant groups have vowed to take to the streets to voice their protest, continuing what these students of the University of the Philippines did in September last year to mark the anniversary of the declaration of martial rule by then President Marcos in 1972. —MARIANNE BERMUDEZ

Victims of martial law atrocities during the Marcos dictatorship are returning to the streets as they see another “nightmare” unfolding in President Duterte’s declaration of martial law in Mindanao.

Selda, a group whose members include martial law victims and political detainees, said it would hold several protests nationwide beginning with today’s “Black Friday” march from the University of Sto. Tomas to Mendiola in Manila.

“This [martial law declaration] is totally disconcerting especially for us who have gone through the nightmare of martial law. It’s scary. But more than being scared, we are resolved to fight the threat,” Selda vice chair Bonifacio Ilagan said.

On Wednesday, Mr. Duterte declared martial law in Mindanao and suspended the writ of habeas corpus in response to an attack mounted by the Maute terrorist group in Marawi City. The President said he may place the entire country under martial rule should the terror threat spread to Luzon and the Visayas.

The President also warned that martial law under his watch would be “harsh.”
‘Very good?’
Selda chair Marie Hilao-Enriquez called on the public to be vigilant against the police and military abuses, as she criticized the President for heaping praise on Marcoses’ ironfisted rule that claimed the lives of around 3,000 activists, students, academicians, writers, artists, labor and community leaders.

“How can martial law be ‘very good,’ President Duterte? Were the arrests, detention, torture, killings during Martial Law good? Was it good, Mr. President, that people were killed? My sister, a young girl and a campus journalist, was not a terrorist; she was a freedom fighter,” Hilao-Enriquez said.

She was referring to her older sister, Liliosa Hilao, a 23-year old student activist who was abducted by soldiers from their house in 1973.

“We have to put a stop to this immediately and be vigilant against abuses,” said Zenaida Mique, executive director of Claimants 1081 which is composed of martial law victims who joined the $2 billion class suit against the Marcoses before a US district court.

“We hope the current generation will not allow the destruction of our democracy. We don’t want them to experience the repression we experienced. We should speak up now,” she added.

Bracing for more EJKs
Former Bayan Muna Rep. Teddy Casiño expressed concern that the crisis in an isolated part of Mindanao may be used to justify human rights abuses nationwide.

“With martial law now imposed in Mindanao and possibly other parts of the country, we are bracing for a new wave of extrajudicial killings both of drug suspects and suspected rebels and terrorists,” Casino said.

For activist Benedictine nun Mary John Mananzan, martial law can be used to justify abuse as she called for its parameters and actual implementation to be clearly delineated. “Must it be the whole of Mindanao? It can occasion a lot of human rights abuses,” she said.

“Bayan opposes any attempt to widen the scope of Martial Law to include the entire Philippines. There is no basis for such a declaration,” the group’s secretary general Renato Reyes Jr. said.

On June 12, Independence Day, groups that include Rise Up for Life and Rights, Karapatan human rights alliance, the National Union of People’s Lawyers, and Bayan are holding another protest rally starting at 4 p.m. at Rajah Sulayman Park in Malate, Manila.