Martial law Duterte’s initiative ‘since many months ago’ – Aguirre 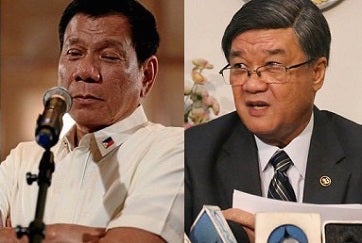 MANILA — President Duterte opted to put the whole of Mindanao under martial law to prevent the country from disintegrating in the wake of the violent attacks mounted by the Maute group in Marawi City, Justice Secretary Vitaliano Aguirre II said on Thursday.

He also played down rumors that he was the “architect” of Mr. Duterte’s decision to impose martial rule in southern Philippines, which many feared might lead to human rights violations.

“It’s the President’s own initiative since many months ago,” Aguirre said in a text message to reporters.

The justice secretary rejected criticisms that the Chief Executive might have overreacted in declaring martial law, noting that the 1987 Constitution has authorized the President to employ such measure.

“The (martial law) proclamation is in accordance with the Constitution and necessary to avoid the dismemberment of our nation,” he argued.

He said groups which raised objections to Mr. Duterte’s action saw it as an “obstacle to their own agenda.”

Meanwhile, Aguirre said he met with some officials of the Department of Justice (DOJ) in Mindanao who raised security concern in prosecuting possible cases to be filed against arrested Moro
extremists.

He said the DOJ might ask the Supreme Court for the creation of special courts which would handle the cases of Maute members to ensure the safety of judges and government prosecutors.

According to Aguirre, the regional and city prosecutors may also move the trial of cases outside of Mindanao. SFM

ADVERTISEMENT
Read Next
Gov’t troops launch ‘precision attacks’ in Marawi
EDITORS' PICK
Cebu City closes its borders
BREAKING: 1,075 people in PH has coronavirus disease – DOH
Style and music journeys with Claudia Barretto
DILG to stranded workers: ‘Stay where you are’ until Luzon-wide quarantine is over
UP-PGH wards for COVID-19 patients finished in 5 days
IATF: Food firms to operate with 50% of workforce during Luzon quarantine
MOST READ
Pacquiao to seek probe on leaked private letter from Barangay Dasmariñas
Tootsy Angara bares neighbor wanted them out of village
McCoy bares devastating effect of failed romance with Elisse
What awaits medical volunteers in DOH drive vs coronavirus
Don't miss out on the latest news and information.