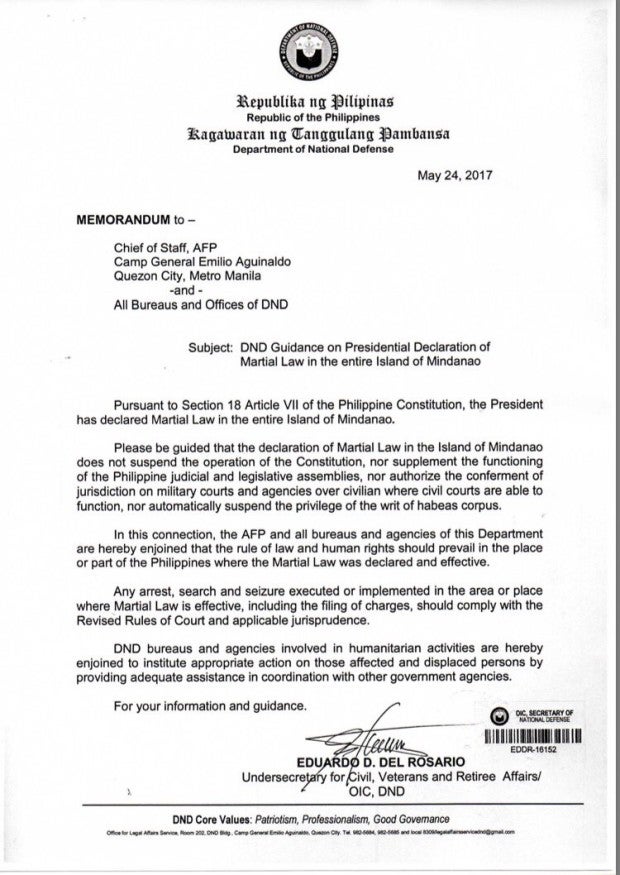 Copy of the memorandum sent to the Armed Forces of the Philippines for the implementation of martial law in Mindanao. (INQUIRER.net)

The Department of National Defense (DND) had issued a guidance to the Armed Forces of the Philippines (AFP) and to its attached bureaus regarding the proper implementation of martial law in Mindanao.

The Constitution will not be suspended with the declaration of martial law, said the memorandum dated May 24, which was signed by DND officer-in-charge and Undersecretary for civil, veterans and retiree affairs Eduardo del Rosario.

The rule of law and human rights should prevail in the area where martial law was declared and effective, the document read.

Martial law also does not supplement the functioning of the Philippine and legislative assemblies, nor authorize the conferment of jurisdiction on military courts and agencies over civilian where civil courts are able to function, nor automatically suspend the privilege of the writ of habeas corpus.

“Any arrest, search and seizure executed or implemented in the area or place where martial law is effective, including the filing of charges, should comply with the Revised Rules of Court and applicable jurisprudence,” it added.

Duterte, in his speech in Manila after his arrival from Russia on Wednesday, said the privilege of the writ of habeas corpus has been suspended in Mindanao. JPV/rga