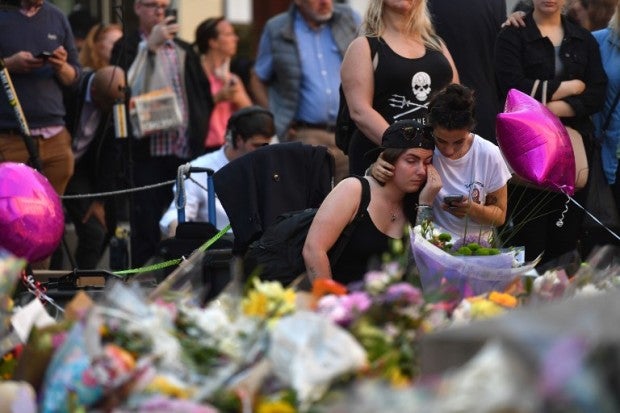 People comfort each other alongside a carpet of flowers and messages at St Ann’s Square in Manchester, northwest England, on May 24, 2017. AFP

MANCHESTER, United Kingdom — Twenty-two people were killed in Monday’s suicide attack on a Manchester pop concert, including an eight-year-old girl, teenagers and several parents who had come to collect their children.

Here are the victims named so far in what was the deadliest terror attack in Britain since the 2005 London bombings:

Eight-year-old Saffie Rose Roussos from Leyland in Lancashire, northwest England, is the youngest victim among those named so far.

She attended the concert with her mother and older sister. Friends said they were both being treated in hospital.

“She was loved by everyone and her warmth and kindness will be remembered fondly,” he said.

Public relations manager Martyn Hett, from Stockport near Manchester, had appeared on television shows like “Come Dine With Me” and “Tattoo Fixers”.

His brother Dan confirmed his death on Twitter saying: “They found my brother last night. We are heartbroken”.

“He left this world exactly how he lived: centre of attention.”

‘Family was her life’

Michelle Kiss was a loving wife to Tony and mother to Dylan, Elliot and Millie, her family said in a statement.

“Family was her life and we are all obviously devastated by her loss. She has been taken away from us, and all that love her, in the most traumatic way imaginable,” they said.

‘Having an amazing time’

Olivia Campbell, 15, had been enjoying the concert with her friend Adam. He survived and was being treated in hospital.

“Go sing with the angels and keep smiling mummy loves you so much.”

Her mother said they had spoken two hours before the blast, adding: “She’d just seen the support act and said she was having an amazing time.”

Georgina Callander, believed to be 18, had been studying health and social care. Her school, Runshaw College in Lancashire, confirmed her death.

Her former school, Bishop Rawstorne academy, brought together students to pray for her and remember her life.

“Georgina was a lovely young student who was very popular with her peers and the staff and always made the most of the opportunities she had at the school,” it said.

Alison Howe, 45, and Lisa Lees, 47, from Oldham outside Manchester, were killed while waiting in the foyer to pick up their daughters, the Daily Mirror newspaper reported.

Their girls, both aged 15, are believed to be safe.

Howe’s stepson Jordan Howe confirmed his stepmother’s death on Facebook, writing: “They took a caring beautiful mum and step mother away from us all she was amazing to us all.”

A Polish couple living in Britain were killed as they went to collect their daughters, Foreign Minister Witold Waszczykowski said.

Polish media identified them as Angelika and Marcin Klis.

“The parents went to pick up their daughters after the concert and unfortunately this morning we received news that they did not survive the explosion,” he told RMF Radio.

Waszczykowski said their daughters were unhurt.

‘One in a million’

John Atkinson, 26, from Bury in Lancashire, was named by friends as one of those killed.

John was “one in a million and loved by so many,” wrote Hayley Turk, who organised an online fund for his family.

“A true gentleman,” she added.

‘Happiest she has ever been’

Kelly Brewster, from Sheffield, northern England, was confirmed as one of the victims by her partner Ian Winslow.

“Kelly really was the happiest she has ever been and we had so many things planned together. My daughter Phoebe will be absolutely devastated like we all are,” he wrote on Facebook.

Nell Jones, 14, died at the scene, her school in nearby Cheshire confirmed.

Sorrell Leczkowski, 14, from Leeds, northern England, was “a delightful member of the school community”, said Elaine Silson, the head of Allerton High School, in a letter to parents.

“Our staff and students are very upset,” she said.

Leczkowski’s mother Samantha and grandmother Pauline, who had 15 hours of surgery to remove shrapnel, are among the injured.

Jane Tweddle, 51, a school receptionist, was waiting for a friend’s daughter when the blast happened, her friend Mark Taylor told BBC radio.

Jane Bailey, head of South Shore Academy in Blackpool on the Lancashire coast, said she a “truly wonderful friend and colleague”. CBB