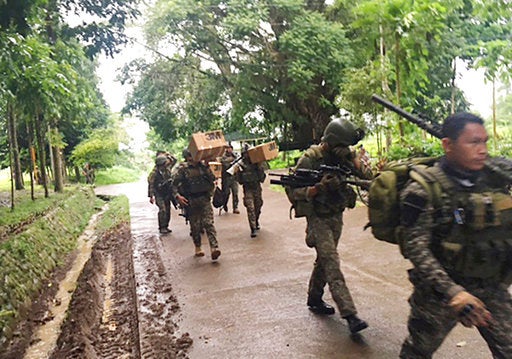 Troops arrive at their barracks to reinforce fellow troops following the siege by Muslim militants Wednesday, May 24, 2017, in the outskirts of Marawi City . AP Photo

The military said at least 13 Maute group members were killed in the ongoing clearing operations in Marawi City.

Meanwhile, five soldiers and two police officers had been killed and 31 other soldiers had been wounded by the second day of fighting in Marawi, according to Arevalo.

The casualties increased as the battle between the government troops and the combined forces of the Abu Sayyaf and the Maute Group dragged on to its second day on Wednesday.

Thousands have fled from the fighting, causing heavy traffic at the exit points of Marawi.

As details of the attack in Marawi emerged, fears mounted that the Philippines could be falling into a growing list of countries grappling with the spread of influence from the Islamic State group in Syria and Iraq.

The violence erupted Tuesday after the Army raided the hideout of Isnilon Hapilon, a commander of the Abu Sayyaf militant group who has pledged allegiance to IS. He is on Washington’s list of most-wanted terrorists with a $5 million reward for information leading to his capture.

The militants called for reinforcements and around 100 gunmen entered Marawi, a mostly Muslim city of 200,000 people on the southern island of Mindanao, Defense Secretary Delfin Lorenzana said Wednesday.

“We are in a state of emergency,” Duterte said Wednesday after he cut short a trip to Moscow and flew back to Manila. “I have a serious problem in Mindanao and the ISIS footprints are everywhere.”

He said a local police chief was stopped at a checkpoint and beheaded, and added that he may declare martial law nationwide if he believes the group has taken a foothold.

The priest, Father Chito, and the others had no role in the conflict, said Archbishop Socrates Villegas, president of the Catholic Bishops Conference of the Philippines.

“He was not a combatant. He was not bearing arms. He was a threat to none,” Villegas said of Chito. “His capture and that of his companions violates every norm of civilized conflict.”

Villegas said the gunmen are demanding the government recall its forces.

On Tuesday evening, Duterte declared martial rule for 60 days in the entire Mindanao region — home to 22 million people — and vowed to be “harsh.”

“I warned everybody not to force my hand into it,” Duterte said on his plane en route to the Philippines. “I have to do it to preserve the republic.”

Martial law allows Duterte to use the Armed Forces to carry out arrests, searches and detentions more rapidly. He has repeatedly threatened to place the south, the scene of decades-long Muslim separatist uprisings, under martial law. But human rights groups have expressed fears that martial law powers could further embolden Duterte, whom they have accused of allowing extrajudicial killings of thousands of people in a crackdown on illegal drugs.

Details from inside Marawi were sketchy because it appeared to be sealed off and without electricity.

Hapilon, an Arabic-speaking Islamic preacher known for his expertise in commando assaults, pledged allegiance to the Islamic State group in 2014. He is a commander of the Abu Sayyaf militant group and was wounded by a military airstrike in January. With reports from Associated Press