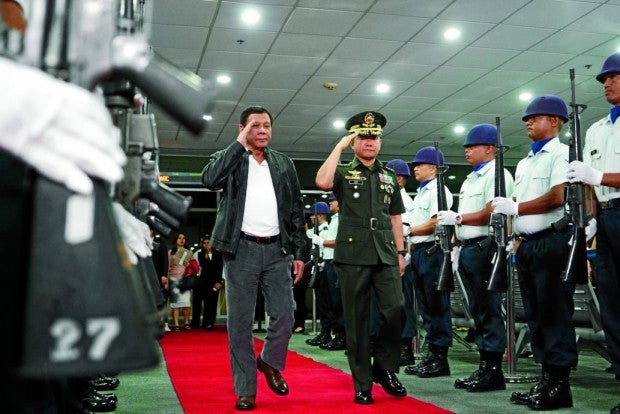 MANILA — The Department of Transportation (DOTr) abruptly terminated a plan to auction off to the private sector the operations and modernization of five regional airports — a P108-billion deal that at one point lured intense interest from local and foreign players.

The scrapping of the auction, involving the Davao, Bacolod, Iloilo, Laguindingan, and New Bohol gateways, was announced by the Public Private Partnership Center Tuesday morning. It said the government would instead purse the development of the airports “through other modes.”

The PPP project is a carryover from the Aquino administration. Being implemented by the DOTr and Civil Aviation Authority of the Philippines, its auction was deferred under Mr. Aquino since it fell too close to the May 9, 2016 polls.

It would have been the second airport PPP after the Mactan-Cebu International Airport, bagged by the Megawide Construction Corp. and India’s GMR Infrastructure in 2014.

In its statement, the PPP Center defended the project—and the entire PPP program itself—as it sought to combat the perception by some that it was being sidelined under the Duterte administration.

“While the PPP Center believes in the credibility of these airport projects structured as PPP, and gratefully acknowledges the solid interest of the private sector, we respect DOTr’s and CAAP’s authority and their decision to terminate the projects,” the PPP Center said.

“It is clear that PPPs remain as a viable option in the procurement of infrastructure projects, especially those that require an integrated approach (i.e. design-build-operate-maintain) in order to save on procurement timing, reduce interface risks, and avail of private sector’s technology and efficiency,” the PPP Center said.

It has stated a preference for the government to first build the projects, and then bid out the operations and maintenance contracts to the private sector later on.

It said this was part of the administration’s “hybird” approach to PPP projects.

Mr. Duterte’s economic managers argued this hybrid policy would lower the cost of public services since there would be no heavy investments for the private sector to recover.

This was a departure from the previous PPP practice wherein private sector handled both the development cost as well as the operations and maintenance aspects.

Another shift is the plan to get more funding for projects from China, given warming ties between Manila and Beijing under Mr. Duterte.

The announcement Tuesday followed a string of decisions under the Duterte administration that led many would-be bidders to question the viability of the regional airports PPP.

In November 2016, the board of the National Economic and Development Authority approved the un-bundling of the airport projects.

This meant each airport project would be bid out individually instead of the the initial structure of bidding, which allowed the auction of the five airports in two separate packages.

Then last month, Transportation Secretary Arthur Tugade said they would likely remove Davao International Airport — the most coveted asset from the five gateways — from the mix. Tugade said the DOTr would develop Davao Airport, then eventually bid out the operations and maintenance to the private sector.

The latest deadline for the submission of pre-qualification requirements for the project was set on June 15, 2017. It had been delayed several times on account of shifting policy.