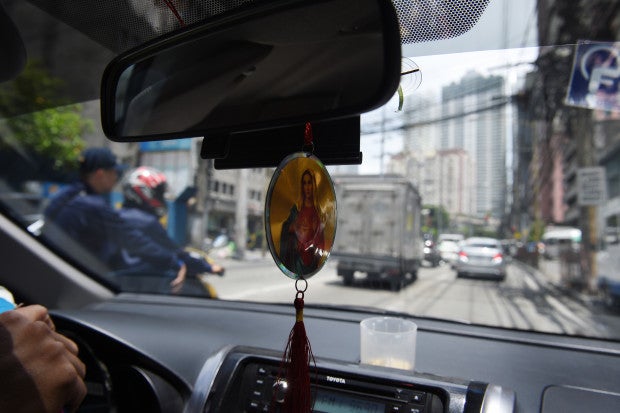 A Filipino taxi driver displays a religious icon inside his vehicle in Manila on May 22, 2017.
Philippine authorities have banned hanging rosaries and religious icons off car dashboards because of safety concerns, prompting an outcry from the Catholic Church which insists they offer divine intervention on the nation’s chaotic roads. The ban, which will take effect on May 26, is part of a wide-ranging new law aimed at eliminating distractions for drivers.
/ AFP PHOTO / Ted ALJIBE

Rosaries and religious icons hanging from dashboards are banned if they block a driver’s line of sight, a restriction that has drawn protest from a Catholic priest, a group of jeepney drivers and senators.

The items can still be placed on the rearview mirror, however, as long as these are coiled up so they don’t swing around, according to the Land Transportation Franchising and Regulatory Board (LTFRB).

The confusion following the implementation on May 19 of the Antidistracted Driving Act, which focused on the use of communication devices and other electronic gadgets while driving, extended to religious items on dashboards.

A priest claims that rosaries and small religious statues in vehicles do not cause accidents.

While he agreed with prohibiting the use of cell phones when driving, Fr. Jerome Secillano said he did not agree with the LTFRB ban on rosaries and religious statuettes in cars.

“The LTFRB is absolutely missing the point by prohibiting the display of small religious images in cars,” said Secillano, executive secretary of the Catholic Bishops’ Conference of the Philippines’ permanent committee on public affairs.

Secillano pointed out that it was not the rosaries that caused accidents on the road, but mechanical problems and the drivers’ ignorance and abusive behavior on the road.

Piston, an association of jeepney drivers and owners, said no data showed that rosaries and religious trinkets caused accidents. “Do not meddle with the drivers’ faith in God,” said its president, George San Mateo.

Aileen Lizada, an LTFRB board member, said religious items, such as rosaries, should not be in the line of sight of a motorist.

Lizada said an earlier traffic regulation, Joint Administrative Order No. 2014-01, prohibited drivers from having unauthorized accessories on dashboards or windshields.

The Senate decided on Monday to look into the controversial implementing rules and regulations (IRR) of the Antidistracted Driving Act.

Senators described as “overacting” and “excessive” the IRR interpretation of the intent of the law.

They were particularly aghast that rosaries and car air fresheners were among those prohibited.

Senate Majority Leader Vicente Sotto III stood up on the floor to slam the IRR and to ask the committee on public services chaired by Sen. Grace Poe to review the rules.

Sotto joined Sen. JV Ejercito in calling on the Department of Transportation (DOTr) to suspend the implementation of the law pending the review.

“They expanded the law … because the real intention of the law really concentrated on talking and texting, using the phone in a vehicle or by drivers,” he told reporters.

Ejercito said the IRR should be stopped until it was made clear.

“Looks like the officials did not understand the essence [of the law]. They have made matters complicated, when it’s basically just about banning the use of cell phones while driving,” he said.

He asked that the DOTr reconsider its restrictions on the placement of cell phones within the line of sight of drivers, especially when these were used for navigational purposes.

Senators Nancy Binay and Richard Gordon sought a review of the IRR as they did not believe that rosaries should be prohibited.

Gordon said the IRR was the “most abused thing in the country” because it tended to change the law.

Binay said the intent of the law disappeared when the DOTr interpreted it.

Lizada pointed out though that the Antidistracted Driving Act did not include jeepney drivers receiving fare and handing out change while driving, which netizens pointed out was also distracting.

She said that the LTFRB planned to resolve this issue by employing an automated fare collection with the jeepney modernization program.

It will hold a special meeting on Tuesday to come out with a memorandum circular ordering public utility vehicles to clear their windshields.

Lizada disclosed that the LTFRB was studying how signboards should be placed on jeepneys and buses, such as having only one on the lower right side of the windshield.

She said UV Express vans should not have signboards because they were ferrying passengers from point to point. —WITH A REPORT FROM AFP